Harry Styles & the Tweet that Launched a Thousand Activists

Who is Harry Styles?

That's the question I asked earlier today when the iPhone began lighting up due to a massive upwelling of ReTweets regarding the Academy Award winning movie, The Cove. It seemed appropriate because at this very moment dolphins are being slaughtered at The Cove, in Taiji, Japan, on behalf of the cetacean captivity industry. The prettiest animals are spared and sent to swim-with programs and marine parks, while the regular animals are butchered with hooks, knives, & machetes; their mercury laden meat served to school children, or sold at markets.

I now know, thanks to Wikipedia, that Harry Styles, born Harry Edward Styles in Evesham, Worcestershire, England, on February 1, 1994, is a singer and dancer in the boy band One Direction. He is best known for his time on The X Factor, which landed him a spot as the youngest member of the band.

But more importantly, Harry Styles is a young man who was moved by The Cove, and Tweeted his feelings about it to 6.9 Million young followers. Many of them, based upon 29 thousand retweets, and the 28 thousand favorites (see image below) seem to have similar feelings regarding the brutal annual killing of cetaceans in the name of SeaWorld, Marineland, The Georgia Aquarium, and Loro Parque.  Or maybe, they never really thought about it much until Harry's Tweet came across their smart phone.

You've now become a "Taste Maker" in a debate that is being won by the good guys; also known as the anti-captivity community. These are the people that think its wrong to enslave cetaceans in concrete enclosures for profit. These are the folks that are reading this article and are connecting using social media.

This group of folks, like you, was similarly affected by The Cove, and also by the needless and tragic killings of two young trainers by SeaWorld killer whales. Several months after The Cove won it's Academy Award, in 2009, Alexis Martinez was killed by the SeaWorld orca, Keto, on Christmas Eve. Then, just two months later, on 24 February 2010, Tilikum brutally killed Dawn Brancheau in view of the public.

Thank you, Harry. Because you probably just launched a thousand young activists that could end up improving the lives of animals being harvested at The Cove, right now. And thank you, social media, for helping to level the playing field, just a bit.

On 17 September 2012 two marine mammal scientists teamed up with best-selling author David Kirby to talk killer whales and Death at SeaWorld.  Dr Lori Marino, a Senior Neuroscientist from Emory University and Dr Naomi Rose, the main character in David's book, had an open forum with the public. This is a fascinating interview which discusses the plight of orcas, belugas, and dolphins, in captive environments. This is a must see presentation for those interested in being brought up to speed quickly on the state of the captivity business.


Learn about Taiji, Japan, where whales and dolphins are now being harvested in the killing COVE. Get the back story on David's book, and hear Lori and Naomi discuss the real time politics regarding the fight over Beluga whales with the Georgia Aquarium.

If you haven't read Death at SeaWorld, there is an excerpt of it below. 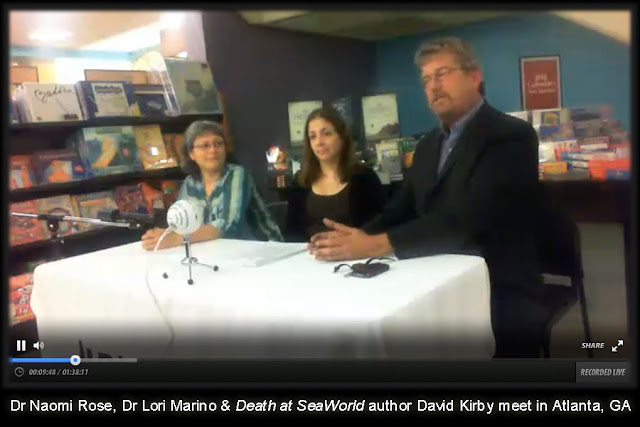 Below is an excerpt from the book, Death at SeaWorld.

A Killer Show: Death At SeaWorld Excerpt by David Kirby


Listen to a group interview with four former SeaWorld orca trainers that are also in the book.