I learned that Obie died yesterday at SeaWorld. He was blind when he died.


My take on walruses, from direct experiences with Obie, Gwen, Slowpoke, and Garfield, are that they are nearly on par with killer whales, in terms of their sophisticated thinking. Maybe it's because they readily understand human vocal commands and you can casually ask them to "come" or "whistle" or "wave," by using plain English. Nothing against dogs, I love dogs, but walruses are, or at least seem, way smarter than the average canine.


"For what it's worth, Walruses are great whistlers"


And in terms of the danger factor, walruses have large tusks and can do one thing captive killer whales cannot... muscle out of the pool, run you down, and pin you up against a wall, or worse. In general, the four walruses I worked with were very good-natured, despite their incarceration.

I remember working with Obie one day when he heard a noise, a bird, or something...  and quickly raised his mammoth head. It was completely non-aggressive but the top of his skull did slam into my chin and broke one of my front teeth off. It was the most significant injury I sustained as an an animal trainer at SeaWorld and I was sent to the dentist for tooth repair. Of note, no incident report was generated from that injury, probably because it was out of the public view.

As I remember Obie, it reminds me to say that the walruses and sea lions are kept in a relative hell-hole at all three SeaWorld parks; especially when compared with the Shamu Stadium & the dolphin stadium.  They essentially live in small cesspools surrounded by steel cages. The pools are filled with their own stool and urine, and the facility is on a separate less-sophisticated filtration & treatment system that requires more chemicals; hence the blindness seen in many pinnipeds at SeaWorld.


I worked at all three animal stadiums at SeaWorld of Florida. In trainer culture, the Sea Lion & Otter Stadium was definitely considered "bottom of the barrel." And this plays out in the media these days when SeaWorld itself points to ex-trainers as being disgruntled because they were "moved to Sea Lion."

In terms of the physical plant, the jail-like smallish hot-tub-sized enclosures were often filled with 4 or more animals swimming tight circles. Area work duties consisted of the daily scrubbing of snot and feces from the walls, floors, food stations and steel bars. Body fluids were everywhere when trainers arrived in the morning to open. When celebrities would come to the park, as far as I remember, they were never allowed to see behind-the-scenes at "Sea Lion."

Think about it. How many "back area" photographs have YOU ever seen of SeaWorld's pinniped show areas? It's shocking and not fit for public exposure.


SeaWorld knows this and keeps it hidden. Where's the media? Stossel?

Cheesy photo, I know, but notice Obie sticking his head out between two steel bars of his small prisoner's cell.

This is the real tyranny; intelligent animals in circus shows for corporations that pay low wages to regular employees while making a handful of executives incredibly wealthy. Obie is a victim of SeaWorld's ongoing exploitation of intelligent marine mammals.

Former Trainer, SeaWorld of Florida '87-'95
Note: Obie was transferred from Orlando to San Diego
Posted by JV at 7:53 PM 3 comments: 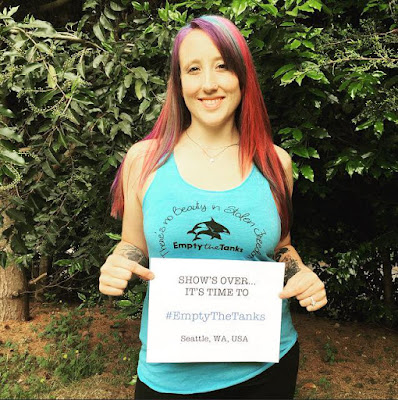