DUE TO COVID-19 #SUPERPOD7 HAS BEEN CANCELLED

Superpod is a biennial gathering & conference on San Juan Island, Washington, USA, hosted by Voice of the Orcas and in consultation with The Whale Sanctuary Project & The Center for Whale Research. The event occurs from 20 to 24 July & the 2020 theme is Tipping Points

This year, you'll hear from at least three scientists from the Center for Whale Research, & also from Drs Naomi Rose, Ingrid Visser, & Lori Marino, as well as movie makers, NGO's, a race-car driver, dam experts, a rhetorician, journalists, former trainers & more. There will be between 30-40 presentations over a 3 day period, including a scholar advocacy program organized by Mariah Kirby, an alumnus of the program (now a biology teacher) & Dr Lori Marino


#Superpod7 is the latest incarnation of an event that began in July 2011, & after an OSHA investigation was triggered into the tragic deaths of two killer whale trainers; one at SeaWorld of Florida & another at Loro Parque

The OSHA investigation & trial formed the backbone of #Blackfish movie & Death at SeaWorld, book. The ex SeaWorld trainers featured in those works became galvanized after a misinformation campaign was waged by the company; SeaWorld publicly attempted to blame the deceased trainers for their own deaths

Blood in the Water by Tim Zimmermann @Earth_ist


SeaWorld is to face a trial jury in a long-standing lawsuit centring on the #Blackfish documentary. The firm has said that the 2013 film exposing their treatment of captive #orcas had no effect on visitor numbers, but investors believe they were deceived.https://t.co/jak3ES6CMs
— Whale and Dolphin Conservation (WDC) (@whalesorg) January 19, 2020

Thus, #Superpod1 was a reunion of former trainers who once worked together at the Orlando park. The concentration of ex trainers combined with orca scientists & folks familiar with the SeaWorld whale captures attracted journalists & a documentary film crew. Most of Blackfish was filmed at #Superpod1 & #Superpod2. David Kirby collected interviews at SP1 & released Death at SeaWorld at SP2. Film crews have attended all Superpod events, including with Bill Neal, director of Long Gone Wild, who attended SP6 & is expected to return for SP7

The event has grown each year & continues to be organized by former SeaWorld trainers, marine mammal advocates & experts whose mission is to illuminate three primary topics, unified by an annual theme, in an evidence-based way:

1. Marine Mammal Captivity & the need for an Orca / Whale Sanctuary
2. Scientific updates regarding orcas, especially the So Resident population
3. Salmon Restoration & the need for a free-flowing Snake River

Volunteerism & minimal fund raising keep the event going. There will be opportunities to contribute if you are interested. The venue has changed as the event has grown. It began at private homes, moved to The Grange, The Whale Museum & San Juan Community Theater. This year, we've rented the SJI Yacht Club, on the water in Friday Harbor, WA. Whale trips on the Salish Sea or whale-watching from Lime Kiln have changed lives, and continue to bring magical moments to attendees


The San Juan Islands are stunningly beautiful. Many attendees stay the entire week of the event. If you only have 3-4 days, here's a rough outline:

If you are an orca lover (aka "dorca"), former animal trainer, naturalist, #Blackfish movie lover, SeaWorld worker, whale biologist, journalist, or just looking for an amazing week of "island time," consider attending #Superpod7. All are welcome. For more information: 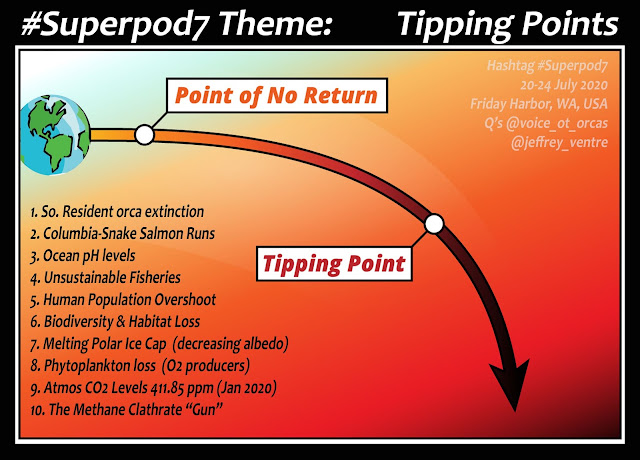