In a recent article published at VOTO, the process of discovery was explained regarding a lawsuit filed against SeaWorld for false advertising. We follow up here with a detailed analysis of an exhibit obtained via discovery. For perhaps the first time a SeaWorld orca medical record will be broken down and explained by a medical doctor & ex trainer. By the end of this article, you'll have a better understanding of cruel captivity in SeaWorld's own words.


The findings are striking & include documented attempts of inbreeding, probable food deprivation and associated malnutrition (lab findings); the use of Valium and also drill bits to bore out orca teeth after an abscess. I've included the original document, available for download, and used Photoshop to add explanations on a 2nd version of the same document. Click to enlarge them, if needed. You can also drag them to your desktop on some computers.

The plaintiffs suggest that the image of a "happy healthy 'Shamu'" misrepresents the reality for captive killer whales. They assert that SeaWorld disseminates misinformation on health issues including lifespan, collapsed dorsal fins, & separating mothers from calves; and that if they had been armed with the truth, they would not have purchased tickets and merchandise from the captivity giant. The plaintiffs are represented by attorneys from the law firm of Covington & Burling.

Seen below, SeaWorld vets document attempted orca inbreeding, jaw abscess, use of Valium in three different whales, teeth drilling, and ultimately the transfer of a 4 year old male orca to another country; separated from his mother and family. 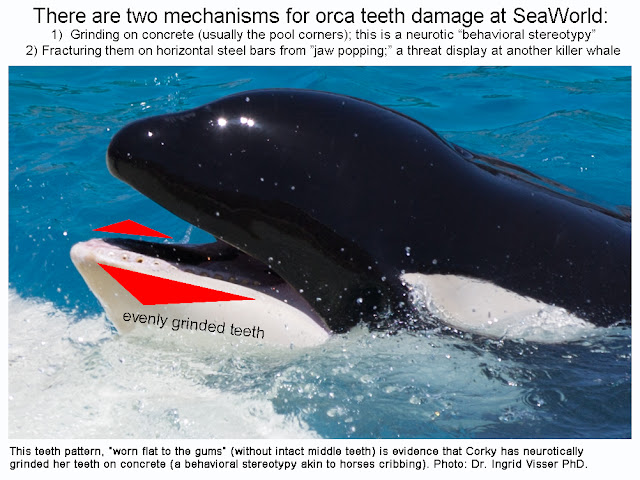 For your knowledge, the upcoming lawsuit is Anderson et al. v. SeaWorld, 4:15-cv-02172, in the U.S. District Court for the Northern District of California. It is expected to go to trial in about one year.

Below is the medical record obtained 28 March 2011. You can view or download the original document. This record contains six "SOAP Notes" for Ikaika, a captive born N. Atlantic male born to Katina on 8/25/2002, at SeaWorld of Florida. SOAP is an acronym that describes each veterinary interaction with Ike. SOAP notes include the Subjective part (what was seen), the Objective Part (exam or lab findings), the Assessment and Plan.

The first SOAP note was recorded on 8/25/2006 and the last on 11/16/2006, just a few days before "Ike" was shipped to Marineland in Canada. He was four years old at the time of these records & it was noted that he was trying to in-breed his young sibling (Katina's calf) along with his older brother Taku, who successfully impregnated their mother about 17 months earlier. 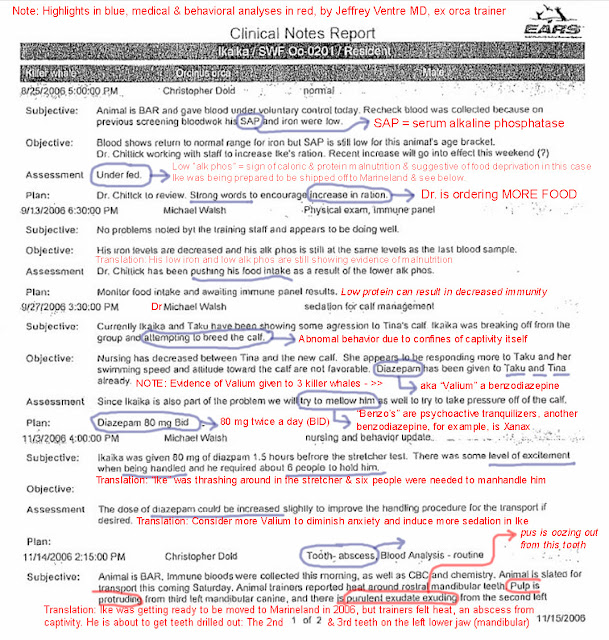 Note to readers:  These documents are densely packed with information. Please click to expand so you can view the "translations:" 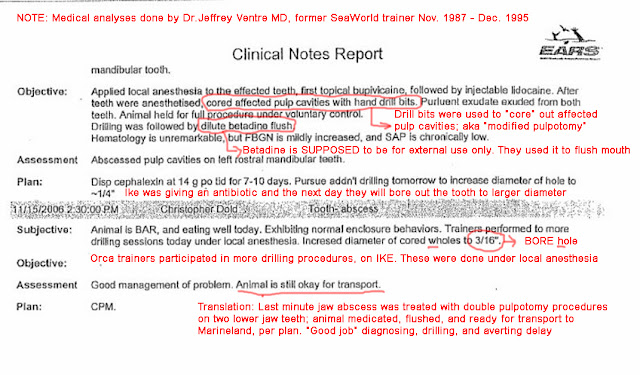 Again, with expert testimony & orca medical records, SeaWorld won't be able to wordsmith their way out of the obvious:

Killer whales suffer at SeaWorld & live impoverished lives, in concrete tanks, eating unnatural food, & are sometimes food deprived. Drugs such as Valium and Tagamet are needed to sedate & prevent ulcers, respectively. Antibiotics are used chronically to treat infections which are often caused by drilled out and broken teeth. Collapsed dorsal fins and teeth damage are the most striking visual evidence of pathology in captive orcas. Family separations lead to suffering and transported whales must re-integrate into artificial pods which are not always accepting of newcomers. 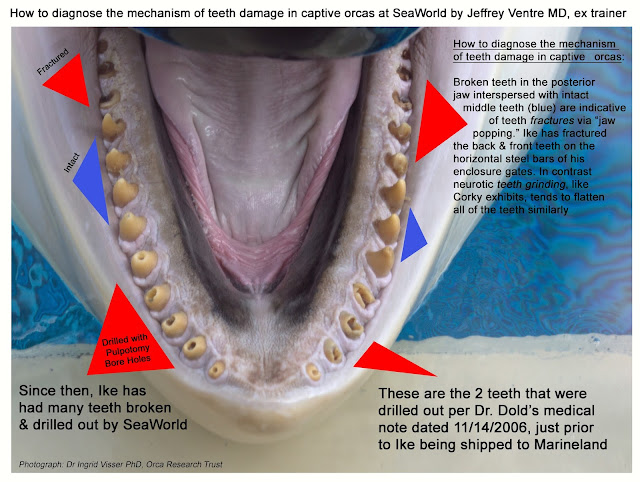 Author: Jeffrey Ventre MD DC is a board certified medical doctor in the specialty of Physical Medicine and Rehabilitation (PM&R). He treats patients with physical impairments from back pain & stroke, to spinal cord & brain injuries. Jeff is also a doctor of chiropractic & electromyographer. In 1996 Jeff joined Ken Balcomb & Dr. Astrid van Ginneken for Orca Survey, a 40+ year photo identification study of the the Southern Resident population of Killer Whales in the Pacific Northwest; a population once decimated by SeaWorld and where the original "Shamu" was taken. Along with his friends and former work colleagues at Voice of the Orcas, his sister Kimberly Ventre, & Jeff Friedman, he's helped organize 5 Superpod gatherings on San Juan Island, WA. Prior to becoming a doctor, Jeff worked at SeaWorld of Florida from Nov. 1987 until Dec. 1995. He worked with SeaWorld killer whales Katina, Tilikum, Kalina, Gudrun, Nyar, Kanduke, Kotar, Taku & favorite, Taima. JV appears in Blackfish movie, Voiceless film & Death at SeaWorld book. Regarding orca captivity, he & John Jett PhD have co-authored several scientific works & a university textbook chapter, here. JV can be contacted @jeffrey_ventre 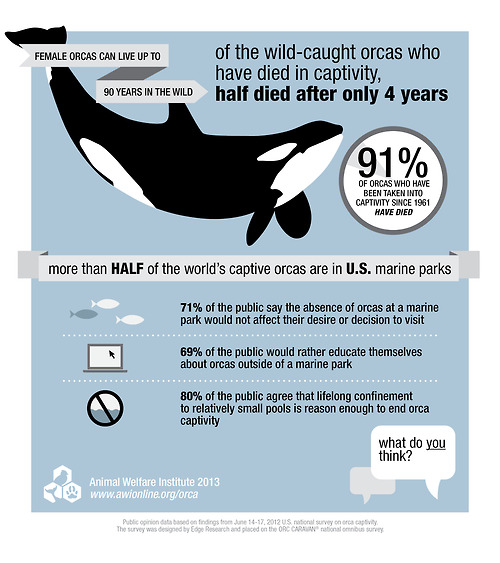