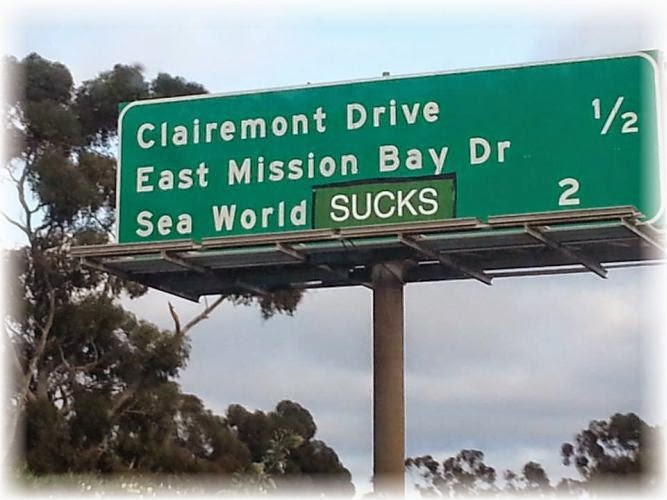 The public condemnation of SeaWorld in the wake of the documentary Blackfish has put the theme park's crisis-management team into overdrive.


Despite overwhelming evidence that killer whales are not suited for captivity, the giant captivity corporation continues to spread misinformation to hold onto a tired business model that the U.S. public has outgrown. Scientific polling data collected by Edge Research and commissioned by the Animal Welfare Institute (AWI) & Whale & Dolphin Conservation (WDC), released on 26 May 2014, can be viewed HERE. Only 21% of the American public support keeping killer whales in captivity; 50% oppose captivity; and 29% are undecided. With those numbers its clear to see why politicians are finally jumping on board the anti-captivity train.

As former SeaWorld trainers, we can offer a firsthand perspective on this controversy. We participated in Blackfish with the hope that the public would learn about the very real suffering of killer whales at SeaWorld. This is reflected in measurable ways, including shorter lifespans, broken teeth, collapsed dorsal fins, and social strife.

We watched as young orcas were forcibly separated from their mothers to be shipped off to other facilities. We listened to the mothers' wails of despair. Katina, a nurturing and conscientious mother, has tragically had five of her seven offspring taken away from her.

Katina currently lives with Nalani, her daughter who was fathered by her own son Taku, and young Makaio. Tragically, soon after impregnating his mother, Taku was separated and shipped to SeaWorld of Texas where he was killed at age 14 by a West Nile Virus infection transmitted by a mosquito bite.

SeaWorld spins these traumatic separations by defining youngsters who are no longer nursing as "independent." That's like saying a 5-year-old toddler is ready to be taken from his or her family. In the wild, orcas rarely leave their family pod and the bond between mother and child lasts a lifetime.

TO LEARN THE TRUTH ABOUT KATINA & HER CALVES, CLICK ON THIS ARTWORK BY LEE HARRISON

There's an abundance of evidence that captivity kills orcas, usually at a young age, and that stress, social tension and poor health are chronic issues among orcas held in marine-park facilities. Genetically adapted to spend their entire lives within the complexity and security of family groupings, orcas captured from the wild have been denied the comfort and mentoring that these communities provide.

Killer whales at SeaWorld are confined to small acoustically inadequate concrete pools, where they must live in extremely close proximity to other whales, with whom they often share no ancestral or cultural connection. The squabbles and tension that result are exacerbated by the fact that they have no way to escape. Subdominant animals like Tilikum have no where to run, and he has no mother to provide him with any social status in the artificial pod. So he gets beat up, picked on, and isolated for his own protection. Those higher on the social ladder are like schoolyard bullies, ramming and raking (dragging their teeth over) more submissive individuals.


This is unreal. @SeaWorld mounting a counter PR campaign in the middle of the most damning documentary imaginable. #Shameless
— Mike Wise (@MikeWiseguy) May 23, 2014

Serious injuries, including bites in which chunks of flesh are torn off, are not uncommon. SeaWorld's tanks are only a a tiny fraction of the area through which an orca would move during a single day of swimming in the wild.

SeaWorld's orca "inventory" in no way benefits orcas in the wild. In fact, the park's whale catchers devastated an orca population off the coast of Washington state by removing so many individuals to be used in theme parks. (Watch: "45 Southern Residents were taken.") Many orcas have died prematurely in SeaWorld facilities from violent accidents, preventable injuries, illnesses caused by stressful living conditions and many other causes, and the park has never released a captive orca back into the ocean.


SeaWorld reports 1.5 billion dollars in ANNUAL revenue, yet over the past DECADE has contributed $9 million to conservation, rescue and rehabilitation. Thus, only 0.0006 of its profits are funneled back into conservation. And conveniently, some of it's "beachies" wind up in display areas, helping generate more profits. SeaWorld has spent close to nothing on providing the whales and dolphins in its facilities with comfort, a real life or a plan to transfer them to a coastal sanctuary, where they would be able to feel the tides, communicate with far-flung friends and family members and experience the immensity of the ocean, where they belong. Instead, SeaWorld of California was cited for polluting Mission Bay in 2012. How’s that for conservation?


SeaWorld's well-financed public-relations machine is designed to deflect and deny, and it is an expert at spinning twine into gold. But the riveting documentary Blackfish has drawn back the curtain on what George Orwell is said to have called "universal deceit." That curtain can never be closed again.

Carol Ray MA CCC-SLP earned a B.A. degree in Psychology from Rollins College in Winter Park, FL, after which she worked for several years training cetaceans at Seaworld of Florida. Carol serves on the expert board for the Free Morgan Foundation, and is a co-sponsor of proposed CA state "Blackfish Bill" AB 2140 which seeks to end captive orca performances and captive breeding. An outspoken freedom advocate, she has been a featured presenter at many orca related events in the Pacific Northwest. As a lover of marine life and an extensive traveler, she cherishes the opportunities she has had to experience whales and dolphins in their natural environment, around the world. Carol earned a Masters Degree (MA)  in Communicative Disorders from the University of Central Florida & is currently the owner/director of three busy pediatric speech therapy clinics in the Seattle area. She can be reached on Twitter at @CarolRay_WA

Jeffrey Ventre MD DC is a board certified medical doctor who specializes in Physical Medicine and Rehabilitation. He is also a board certified doctor of chiropractic. He practices in Central Washington State, treating patients with disabilities ranging from spinal cord injuries to back pain. He worked as a marine mammal trainer at SeaWorld from 1987–1995, spending seven of eight years with cetaceans. In June of 1996 he participated in “Orca Survey” with Ken Balcomb and Dr. Astrid van Ginneken, an ongoing photo-identification study of the Southern Resident community of killer whales in the Pacific Northwest. Seeing free-ranging killer whales radically altered his perspective. In 2011 he co-authored a paper with John Jett, PhD that describes the health issues and decreased lifespans of captive orcas. He's since teamed up with Dr Jett on two additional peer-reviewed scientific papers as well as an upcoming book chapter regarding animals in entertainment. He was subpoenaed in 2011 as a witness for the federal government in the case of OSHA vs SeaWorld. He can be reached on Twitter @jeffrey_ventre