Why is SeaWorld Announcing Unna's Bladder Infection to the World?

Thank you to @Mendette for pointing us to the Merck Veterinary Manual. The entry in it regarding mycotic infections in marine mammals provides insights for all of us that explain why SeaWorld's captive orca Unna is sick; very seriously & hopefully not terminally.

The reason Unna's  immune system is compromised is from captivity itself. And The Manual explicitly connects captivity with fungal infections due to stress.


[The Merck Manual is a medical textbook of diagnosis and therapy]

The serious nature of her illness is the reason SeaWorld has announced it (proactive damage control) in case the company faces a public relations nightmare prior to the upcoming California Coastal Commission Hearing in Long Beach, on October 8th.

I'm so worried about Unna.


I searched all day and all I could find on Mycotic Diseases is here (The Merck Manual on Veterinary Medicine).

Below is SeaWorld's Press Release, first; followed by a description of mycotic infections in cetaceans from The Merck Manual.  We hope you'll read both. The pathogen isolated in Unna's bladder is Candida. Bold accents have been added to certain key words.


UNNA THE KILLER WHALE UNDER TREATMENT AT SEAWORLD SAN ANTONIO

Killer whale veterinarians and trainers at SeaWorld San Antonio are giving around-the-clock attention and medical care to Unna, a female killer whale with suspected cystitis caused by a fungal infection.

Preliminary tests show that the fungus is Candida, an organism that is pervasive in the environment and found in many different animals including whales and dolphins. Experts are still determining the species of Candida and its susceptibility to specific medications, as this particular fungus does not appear to be acting like normal Candida. It appears to be resistant to commonly used medications, and we are working aggressively to overcome this challenge. 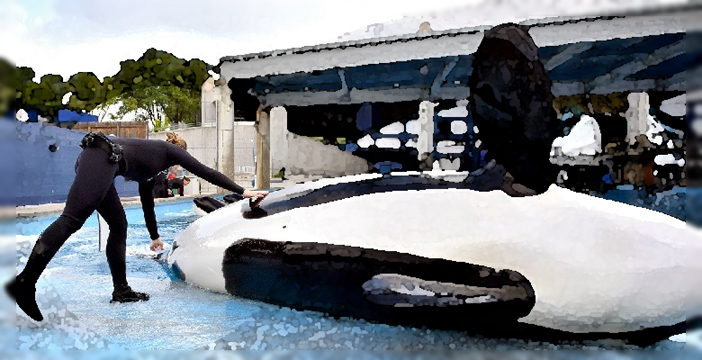 Captive marine mammals seem particularly prone to fungal infections (see Fungal Infections). Most appear to be secondary to stress, environmental compromise, or other infectious disease. Some systemic mycoses have distinct geographic distributions. Diagnosis is based on clinical signs and confirmed by identification of the organism in biopsy or, preferably, culture. Wet mounts in lactophenol or cotton blue may render an immediate diagnosis with some of the morphologically distinct fungi. Tissue smears cleared in warm 10% potassium hydroxide can be examined to identify characteristic fruiting bodies or hyphae.

In cetaceans, the lesions usually are found around body orifices. At necropsy, esophageal ulcers are often found, particularly in the area of the gastroesophageal junction...


Diagnosis is based on identification of the yeast in cultures or biopsy.


[NOTE: These are Unna's medical options]

Candidiasis generally responds well to ketoconazole (6 mg/kg, PO, sid) along with correction of any environmental deficits. Supplementation with prednisolone (0.01 mg/kg) may be appropriate to compensate for ketoconazole inhibition of glucocorticoid production. Fluconazole (2 mg/kg, bid) has also been used successfully.

One anecdotal report suggests a possible toxic reaction to ketoconazole in a northern elephant seal (Mirounga angustirostris). Early detection and treatment is usually successful. Another opportunistic yeast, Cryptococcus neoformans, has been diagnosed in fatal advanced pulmonary disease in a bottlenose dolphin. Prolonged treatment with itraconazole (120 days) at routine mammalian doses was ineffective despite serum drug levels above the suggested therapeutic range.


For those studying cetacean confinement & exploitation, this condition with Unna is a hallmark manifestation of the physiological stresses associated with captivity at SeaWorld Parks & Entertainment.