The Superpod events are gatherings that occur on San Juan Island, WA, usually via Seattle, in mid-July, and are open to the public. Folks travel in from around the world, and make their own arrangements. Dr. Ingrid Visser won the "man-mile travel award" at the last Superpod, coming from New Zealand.

The event features Pacific Northwest killer whales, including the famous "Southern Residents," but also transients, whose numbers are on the rise, and who are frequently seen from boats and shore.

The people that attend the event include scientists, journalists, former trainers, naturalists, film-makers, bloggers, and people that want to see killer whales in their natural home. This year the event begins on "World Orca Day, Monday July 14," as declared by Dr. Visser. Scheduled events will occur Monday through Friday, but most folks will be departing on Sunday, July 20. 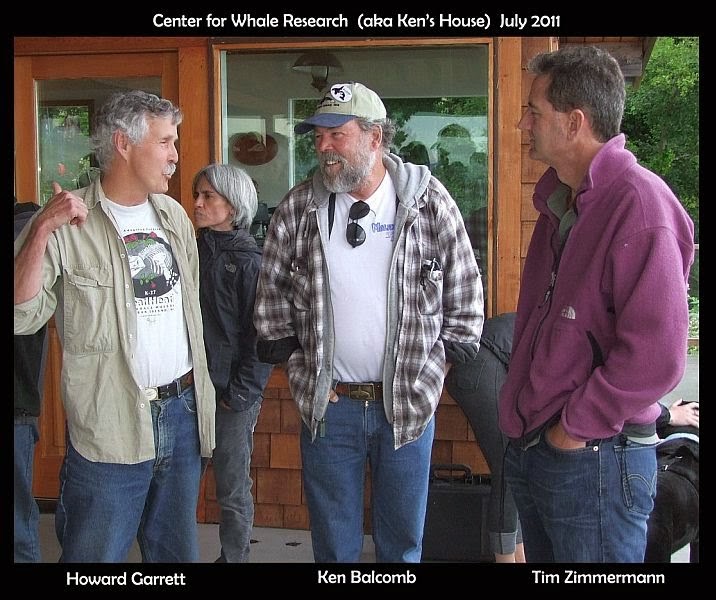 Howard, Ken & Tim were all involved in Blackfish at Superpod 1 & 2. Photo via JV.

Superpod gatherings occur in the "San Juan Islands" of Washington state, and (also) on "San Juan Island." The San Juan Islands are an archipelago in the Northwest corner of the contiguous United States between the US mainland and Vancouver Island, British Columbia, Canada. They are accessible to the public by water and air. Friday Harbor is the main town on San Juan Island. It is where your ferry or sea plane will take you.

A Washington Stare Ferry Navigating the San Juan Islands. You drive your car onto this boat.

The waters between the islands are also the home to Chinook salmon, the Southern Resident killer whales' favorite food. J,K, and L pods, including Granny, the 103 yo matriarch, congregate each summer in a "Superpod gathering." Thus, this event is both a gathering of killer whales and "whale people," complete with annual customs, and festivities.

The most common means of travel to Friday Harbor is by Washington State Ferry out of Anacortes. One advantage of this approach is that you can use your own vehicle for island transportation. But other options exist; and they include a high speed catamaran out of Seattle, called the Victoria Clipper.

This is a terrific ride, although it's a walk-on ferry only. It's a great option if you're meeting up with other folks that have transportation, or don't need a car. Of note, there are plenty of ways to get around on the island without a car, including bicycles, scooters, and island taxis. 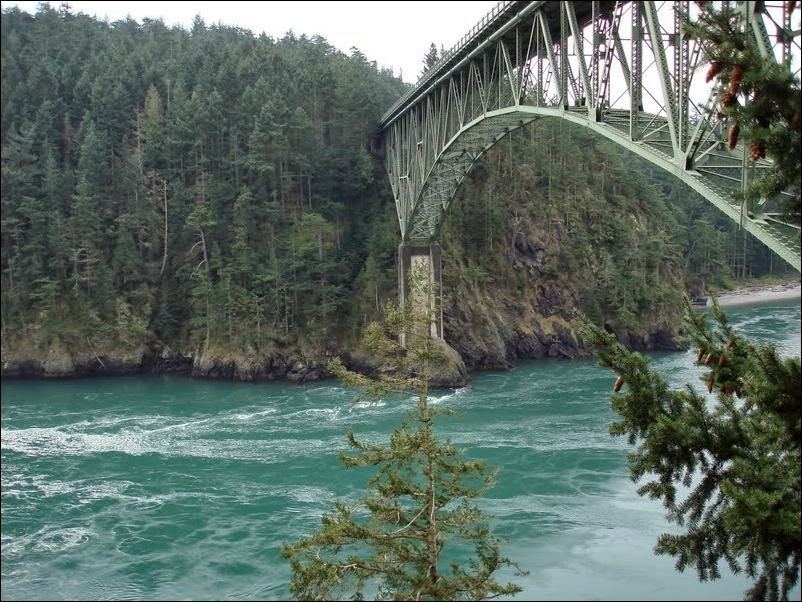 Stunning View of Deception Pass. If you ride a Victoria Clipper Catamaran out of Seattle, You'll go under this Bridge

Lastly, one can arrive on a sea plane via Kenmore Air from Seattle. This will get you in and out of the event quicker than the other options, and the ride is stunning; definitely a great way to arrive. If you're a heavy packer, though, this ride has a weight limit.

Regardless of which method you select, they all offer incredible approaches to a very special place, Friday Harbor and the surrounding ocean.

Once there, various options exist for lodging all over the island. These include hotels, B&B's, camping, marina cabins at Snug Harbor, large boats, and rental homes. Over the years, we've found the most cost effective method (excluding camping) is to get a group in a rental house together. This year, the four of us at Voice of the Orcas, will be co-hosting a party with Jeff Friedman @orcawild on Wednesday July 16, at this ocean front location, below. The deck provides a great view of killer whales and the Haro Strait. It also serves as a picturesque backdrop for interviews, especially when whales are swimming by (which typically is a daily occurrence). Superpod events have historically attracted journalists, authors, and film teams. Wednesday's deck party should bring lots of folks together in one location, and hopefully some very special #Blackfish.

Events occur daily, and include whale watching tours, documentary screenings, presentations, and nightly social gatherings. Below is a rough schedule to give an idea of #Superpod3. Keep in mind that it stays light very late in mid July

Lastly, slide show presentation topics & potential movie screenings have been discussed and will be announced when various experts confirm their travel plans. For reference, Superpod gatherings have become an educational real world setting for disseminating (actual) killer whale knowledge & facts to regular people from all over the world. Most folks consider the experience pivotal or life changing, including the four of us at VOTO.

Use the comment area for questions. This itinerary will be updated as new information becomes available.