The Cure For Toxic SeaWorld is Blackfish Bill AB-2140

Amidst the Blackfish backlash, toxic SeaWorld throws a bone to California politicians and Wall Street

All Eyes on California

The proposed Blue World Project is a media play. Plain & simple. Rolled out to a live audience with a suspenseful unveiling, complete with rumors planted the day before, & some ball-park figures provided to Wall Street. It was a spectacle, to say the least.

There isn't much information on how the proposed "Blue World Project" would impact the Mission Bay ecosystem. As recently as 2012, SeaWorld was cited & fined for polluting it. Subsequently, its hard to believe that SeaWorld can begin digging a massive hole on city property, with additional water treatment equipment, without due process. This would include environmental impact studies and approvals from regulatory agencies including the California Coastal Commission and the city itself. SeaWorld leases the land from San Diego. Check out this excerpt from Frank Gormlie of the  San Diego Free Press 23 October 2012:


SeaWorld is not just any corporate entity. Outside of the thousands of birds crapping in the water, one of the biggest polluters of Mission Bay is SeaWorld itself. Just earlier this year, SeaWorld was fined $6,000 for dumping excessive ammonia and animal waste into the Bay. (See Fox5 video here and “SeaWorld Cited for Exceeding Mission Bay Effluent Limits” in an article by Matt Potter, March 20, 2012 in the San Diego Reader.)

SeaWorld is the largest discharger of water into the Bay and has been a known polluter of the body of water, as the bay has been on California’s list of impaired water bodies for several years as it does not meet the Clean Water Act standards.

Next, note the relatively long timeline for implementation, and also how it will happen one park at a time. This gives the company plenty of wiggle room and lowers risk.

If AB-2140 passes, the San Diego "Blackfish puppy-mill idea" will likely evaporate, as breeding captive killer whales would then be illegal. Faced with that, SeaWorld could halt the plans, or even shift the project to Orlando, a site that makes more sense, once you remove the politics.


In general, company officials have made it clear that expanding the breeding program is a big reason for the proposed addition. In regard to its business model, which includes the unethical
artificial insemination (AI) of unnaturally young female killer whales, CEO Jim Atchinson told The Today Show earlier this week...

“We make no apologies for what we do and how we do it.” (SeaWorld)

Here's the deal:  SeaWorld is banking that this gesture will win it votes in the California legislature, and don't expect quick action. Major construction on Blue World will not begin until after a final vote on AB-2140 is counted. The company may stage a ground breaking ceremony for the press. But one shovel-load does not dig you a 50 foot hole in the ground with added water treatment capability, plumbing & "orca treadmill."

Hence, all eyes on California!

Assemblyman Richard Bloom needs help from a growing coalition of concerned citizens. Consider following Mr. Bloom, and spreading the word about AB-2140. These are live Tweets, from him:


The Blackfish Effect will continue to happen. Intermittent airings by CNN, DVD sales, and availability at Netflix & Red Box continues to bring aboard more education & people that wish to end captivity. Some folks hope for the right of "bodily liberty" for "non human persons." These awakened friends add to a growing army of regular people that seek justice for killer whales, an end to poaching, sensible regulation of farms, and more oversight for corporations.

A critical mass of informed consumers has been achieved, with backlash coming from people & students from all walks of life, as well as both sides of the political aisle. For us, its time to craft the transformational political change we need, and that involves taking on a corporation at the ballot box. The Blackfish Effect needs to be converted into political action.

The animal justice movement is growing with each airing of Blackfish. Thank you Blackfish director Gabriela Cowperthwaite and producer Manny Oteyza.

Its always easier to try and look like the "thing" than to actually BE the "thing." Holding out for real change #SeaWorld #Blackfish.
— GabrielaCowperthwait (@GabCowperthwait) August 15, 2014

"Once you see it, you cannot un-see it." 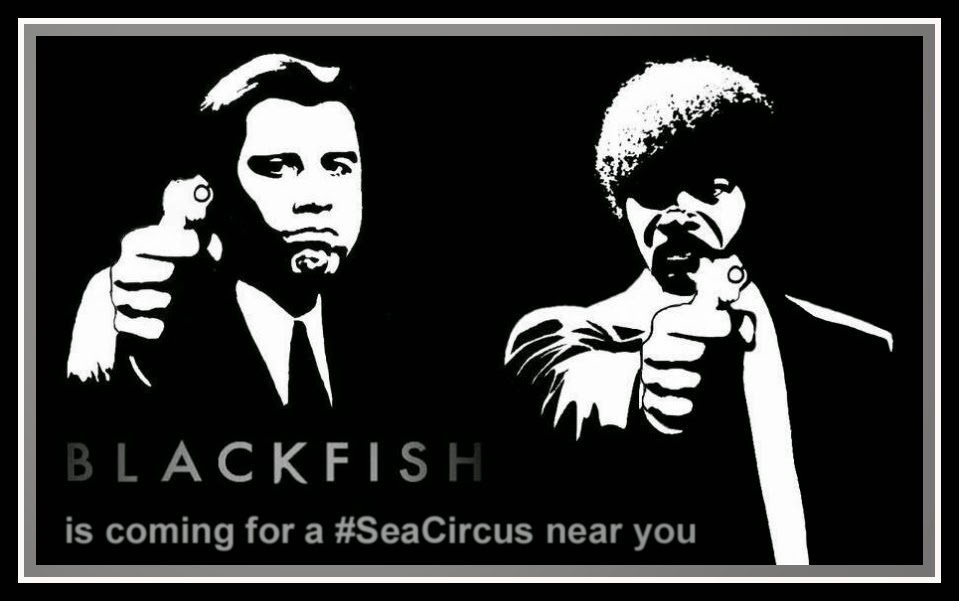 Considering that the Orlando park is more profitable, sees more visitors, is home for the corporate headquarters, & has cheaper construction costs, you'd think that the Blue World Project would start there. So what gives?

According to this report by WKMG-TV / Orlando, CBS Affiliate, as well as the SeaWorld web page, "The San Diego project is expected to open in 2018. New killer whale homes will then be constructed at SeaWorld Orlando and SeaWorld San Antonio."

Choosing San Diego is a strategic business move. This accomplishes at least five things for SeaWorld:

1. Shows that they're doing something in response to public sentiment & collapsing stock value

2. This proposal provides cover to vote down Blackfish Bill AB-2140. SeaWorld gives a lot of money to campaigns in California, and politicians are happy to take "donations."
Assemlymen who might buck public opinion & strike down the bill, can now cite "Blue World Project" as an example of how the company is evolving.


To get a feel for public opinion in the state, watch this heartwarming video about three young ladies who delivered 1.2 million signatures to the California Assembly in support of a bill that would ban captive breeding of Killer Whales in the state.

3. It shows Wall Street they're "all in" and gives pro-SeaWorld Voice of San Diego plenty of feel good stories to publish. VOSD hosted a good live debate, but tends to frame SeaWorld's presence in San Diego as a beneficial, economic one, without much regard for the killer whales suffering in captivity. When captivity of killer whales gets reduced to economics, by Wall St, or VOSD, it misses the point. The coverage has been helpful to SeaWorld.


4. The new pool, if AB-2140 is shot down (i.e. SeaWorld gets its wish), will become a #Blackfish "puppy mill" for SeaWorld's overseas expansion. In my opinion SeaWorld couldn't be happier with the ongoing Russian captures (more genetic material), and is looking carefully at opportunities in Dubai, where there is already a large marine life park itching to get some killer whales.

I've written about this with John Jett PhD in a textbook chapter regarding animals in entertainment. We believe that the United Arab Emirates (UAE) is gearing up for killer whales, and combined with company statements, will likely get them from SeaWorld. This effort, to breed animals as quickly as possible, is a way to get more animals into places like the UAE, for a hefty profit.


Placing killer whales into a region where temperatures regularly exceed 120 degrees Fahrenheit, with little regulation or oversight, is a disturbing thought.


5. It changes the conversation, at least temporarily. SeaWorld has been getting bashed in the media, lately. This is a way to change the subject, for a while (see image of "Blackfish Wednesday")

SeaWorld Just Doesn't Get It


In general the proposed Blue World Project is a striking indicator that SeaWorld really doesn't get it. It also points to the incompetence of the management team as described in this Dodo article by Keneth Leher. His five points are worth restating:

1.  The SeaWorld brand is now tarnished, at best.
Toxic? Likely. The brand represents the torture of whales for an increasing population of concerned citizens. If you love whales (and who doesn’t), you don’t like SeaWorld.

2.  Wall Street has turned on SeaWorld.
The stock is down over the last year by 45% and $1.6 billion in market cap has evaporated. You can sometimes fight City Hall, but it’s nearly impossible to fight Wall Street. And Wall Street is done with SeaWorld.

3.  Consumers are turning away from SeaWorld.
Attendance has dropped 4.3 percent over the first 6 months of 2014. It takes forever and a day for consumers to return to a company once they have walked away. And they usually never come back.

4.  The internet has turned against SeaWorld.
“Blackfish,” The Oceanic Preservation Society, The Dodo, over 100,000 users on Change.org and many other sites have made it their business to actively campaign against SeaWorld’s mistreatment of animals. SeaWorld can’t survive that, plain and simple.

SeaWorld has proven itself totally inept in dealing with one, two, three and four. They haven’t got a clue.


In summary, SeaWorld really doesn't get it, and hopefully changes can be made in middle & upper management that will improve the quality of the management team & improve the future lives of the killer whales in its care.

"Blue World Project" does not address the issue of broken teeth, collapsed dorsal fins, diminished quality of life, social strife, and shortened lifespans, all of which are caused by captivity.

Blackfish remains a critical tool in a growing movement. Lastly, AB-2140 is the cure for what ails Toxic SeaWorld.