Our Statement Regarding SeaWorld’s announcement to End Captive Orca Breeding

SeaWorld’s announcement to end captive orca breeding is a step in the right direction, for orcas, and we support efforts to phase out all marine mammals from captivity.


SeaWorld’s partnership with the Humane Society is significant [two former foes pledging to work together] and we hope the company will become a leader in ocean conservation, help to restore salmon runs, and assist the animal justice community in obtaining nonhuman rights for cetaceans. We understand it took courage for CEO Joel Manby to make these changes; Kudos to his leadership.

It must be pointed out that SeaWorld’s shift is a financial decision and the public itself has made this happen over a several year time span. THANK YOU for not buying a ticket. There are some inaccuracies in the announcement, such as the characterization of Keiko's release effort and no mention of other species still incarcerated at the park.


We’d like to send love to Tilikum, who continues to languish alone in Orlando, and wish we could comfort him in his final hours. In the end, his message was heard. Thank you, Tilly

Voice of the Orcas: 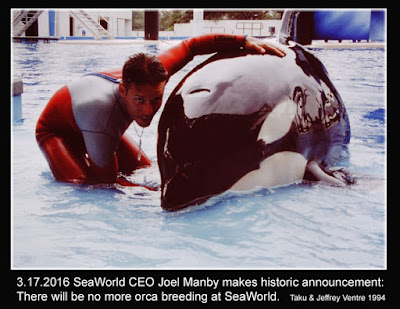 SeaWorld Can Extend Tilikum's Legacy Beyond the Show Pool

NOTE: This blog was updated as Tilikum lived for almost a year after this publication date. The updated article is HERE

To Whom It May Concern:

Myself, and the other members of VOTO, Samantha Berg, John Jett, and Carol Ray, have been informed that Tilikum, a SeaWorld killer whale in Orlando, is near death. We are saddened by this announcement, although it is not unexpected.

Tilikum has developed an antibiotic resistant bacterial infection of the lungs, with pneumonia being the leading reported cause of captive killer whale mortality. Efforts to treat Tilikum have failed due to decades of antibiotic and antifungal therapy, medications that three-of-us at VOTO have fed him, and medications he was on in 2010 when he killed Dawn Brancheau, as reported by APHIS, here.

Tilikum has been getting fed antibiotics consistently for at least two decades, primarily because of his badly damaged teeth, including open bore holes that must be flushed with antiseptic solution 2-3 times daily. These bore holes can lead to fish particles, roe, and other debris getting into the jaw and eventually into his blood stream, causing chronic low grade infection(s), and able to seed various organs, including the lungs. The end result is that, now, Tilikum is filled with bacteria that are resistant to powerful and broad spectrum medications that SeaWorld is dosing him with.

Tilikum is, at this time, likely suffering from pulmonary edema, or excess fluid in his lungs. When the surface area of his alveoli diminishes sufficiently, he will suffocate in a stretcher, at SeaWorld. In a last ditch effort to obtain air to oxygenate his tissues, he will likely thrash in the stretcher, and go through a period of "death throes," prior to finally passing. This is a particularly dangerous time for the animal care and training staff on hand.

A crane is reportedly standing by, possibly to recover his body if he should pass. This information is unconfirmed, but it does correspond with SeaWorld's recent announcements seen in this video:

Many citizens, including some in the scientific community, are hopeful that SeaWorld will dedicate Tilikum's cadaver to science. This gesture would advance our understanding of the impact of captivity on marine mammals such as Tilikum.

Histological samples of dorsal fin collagen would help us understand collagen fibrillogenesis in killer whales, and why dorsal fins collapse in captivity. Kidney tissue samples could help us understand the effects of chronic dehydration on orcas, like Tilikum, who require gelatin as a dietary supplement. Cardiac tissue could be examined for evidence of physical deconditioning. Eye tissue could be used to understand the effects of looking upward toward trainers, a behavior that is probably contributory to early cataract formation in show animals that must look for hand signals from trainers, on stage. Blood tissue can be used to test for elevated titers of viruses such as West Nile, St Louis encephalitis, and other mosquito transmitted "bugs" associated with zoos, but not seen in wild animals. Immunoglobulin levels could provide information on captive orca immunity. Detailed bone and joint examinations could be examined for evidence of various arthritides. DNA testing could help identify Tilikum's natal pod, and so on.

Take the NFL as an example

Samples of brain tissue were critical in understanding the newly described condition (seen in NFL players) known as Chronic Traumatic Encephalopaty (CTE), and as depicted in the feature film "Concussion," with Will Smith. The NFL was initially resistant to outside scientists performing these studies, but is now helping to fund them. SeaWorld can mimic the NFL, and CEO Joel Manby can get credit for the change, something that might give him some job security.

Killer whales in captivity are also known to slam their heads on solid objects such as gates and concrete walls, especially adult male killer whales, with Kanduke being a famous example. Tilikum's brain tissue, or perhaps a new MRI, as depicted in Blackfish, could push our understanding of the orca brain forward, a brain four times larger than our own.

SeaWorld has an opportunity to extend Tilikum's legacy beyond the performance pool and to substantiate it's claims of performing relevant science. We are hopeful they will take up this idea for the benefit of science, the public, policy makers, whale lovers, and for future killer whales.

Thank you, Tilikum, for your sacrifices. Your legacy will live on through us and the millions of people your story has touched.