The new baby killer whale, Ula, recently celebrated with fanfare at the Loro Parque theme park, is battling an infection or trauma & may be fighting for her life. The calf is under a sun protection tent, with apparent phototoxic skin lesions, a misshappen head, & a diseased left pectoral fin. She's currently getting bottle fed with evidence of her mother Morgan pushing into the steel gate separating them.

The tiny calf, born with what appears to be a congenitally disfigured head (or a never-before-seen variant) has contracted a pathogen or suffered an injury which may be life-threatening. We don't know for sure. Photographs of the ventral surface of her tail show extensive needle-stick marks, for age, suggesting frequent blood draws and/or the administration of IV antibiotics. 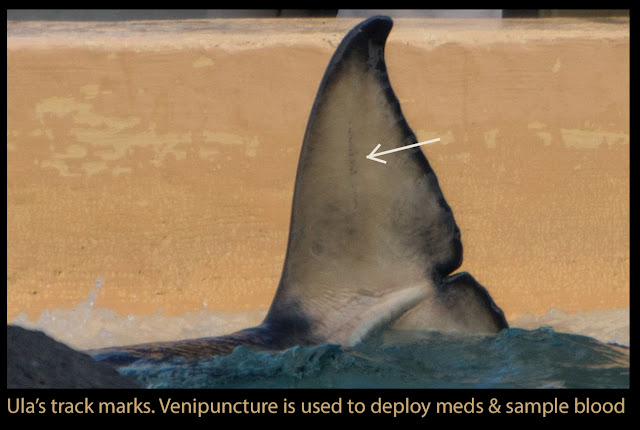 When only days old she was separated from Morgan and has recently been photographed by visitors to the Spanish theme park, Loro Parque (LP), where she was born. Note, unless otherwise noted, the images & the video below were supplied by activists who requested to remain anonymous for fear of retaliation from LP. The captions in this video came with it. Please watch:


Dozens of images have been reviewed by experts who suggest, along with the abnormality of her melon, the infant may be in a declining state of health based on the diseased appearance of her left pectoral fin & areas of the body


"Various photos suggest the calf has a flattened profile at the front of her head, where it should be rounded with the melon. This could be because of the angle of the photos, but given the number of them, some of them from Loro Parque, it’s hard not to wonder if something is wrong there. While we cannot confirm there is a deformity, the management of the park should be transparent, given the public concern, and offer evidence that all is well with the calf. Not just statements at face value, but medical records and even an independent assessment.” 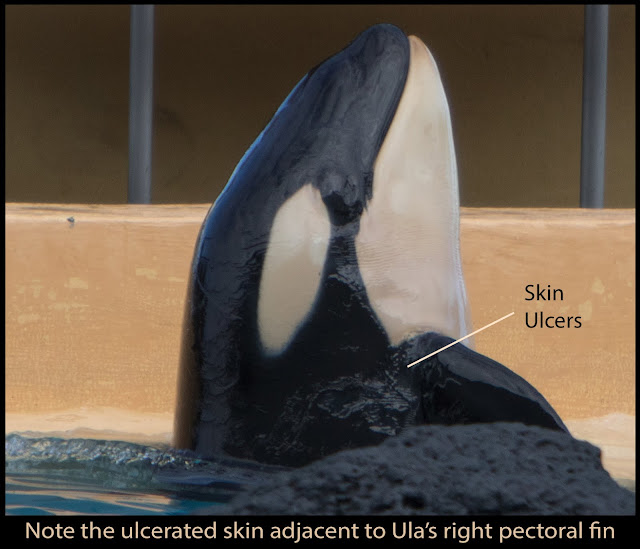 
"I’ve never seen anything like this in the wild. Not a disfigurement of the melon or pathogen of any body part like this poor calf has. I feel so sorry for both her and her mother, Morgan. It emphasizes to me just how wrong captivity for these animals is at facilities like Loro Parque.”


“The animal’s appearance, her separation from mom, and their bottle-feeding intervention reminds me of Nyar, a baby killer whale that I helped to hand raise at SW of Florida.  Nyar was separated from her mother Gudrun not long after she was born.  The little whale lacked coordination, which hindered her ability to eat, swim upright, and interact with the other animals.  Her difficulties were so severe that she was force-fed, and at times she struggled to get air.  Nyar eventually died at 2 years of age, with a necropsy report suggesting that a fungal infection in her brain had killed her.  Nyar’s case was heartbreaking to me. Unfortunately, if Ula does survive then her life will be spent in a barren tank performing tricks for frozen fish. Not a good life for an orca. Not a good life for any cetacean."

The calf’s mother, Morgan, has been observed as she floats forlornly outside the barred metal gate, hoping to catch a glimpse of her child. Loro Parque initially stated:


“From the very first moment, Morgan demonstrated to be an exemplary mother attending to her newborn, which is swimming next to its mother”


And then they said:


Despite demonstrating that powerful maternal bond, the LP staff have removed the calf from her mother, first stating that it was because Morgan was not providing enough milk and then that it was in the interest of safety.

Rather than providing supplementary feedings, or temporarily separating them only for feeding times, the facility has placed the newborn in a tiny barren tank, alone.

On the 21st of Jan 2019 the first evidence that Morgan's calf is no-longer-bonded with her was posted on-line by a member of the public. This video shows Morgan being allowed to enter the medical tank and then departing, with the calf ignoring her. 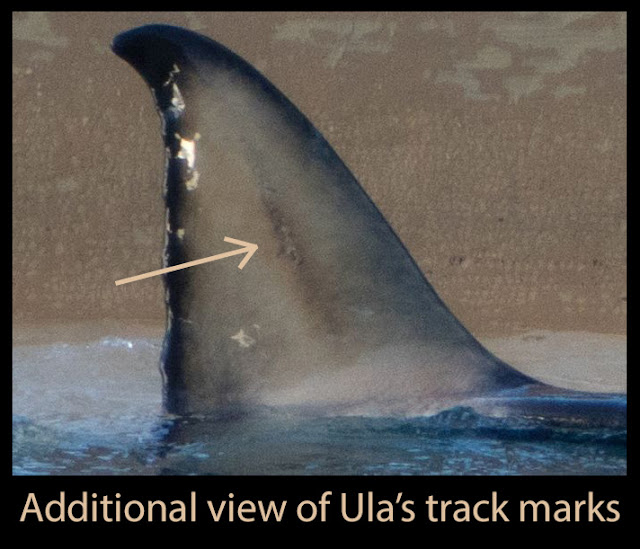 To date, Loro Parque has not made any public mention of the issues concerning either the melon or the compromised left pectoral fin. The sad irony of this lack of transparency is that Loro Parque has repeatedly justified its keeping and breeding of Morgan in the name of “scientific research” and even touted research already being conducted on the young infant regarding echolocation which, by the way, is facilitated by an orca’s melon.

As questions continue to be raised whether SeaWorld’s transport of Morgan from the Netherlands to Spain could have resulted in her alleged hearing loss; the question must be asked, could some of the “research” already imposed on this infant by LP and several universities have contributed to her compromised condition as well?


The background story on Morgan is just as appalling. She has been used as a commercial pawn in one of the most highly valued live-animal trades in the world. As Matthew Spiegl, Legal Counsel for Free Morgan Foundation notes, the breeding of the calf’s mother, Morgan, is already the subject of both legal and legislative challenges in the Netherlands and the European Parliament. Questions also persist of the Spanish Government’s complicity in condoning the unauthorized breeding of Morgan.


Spiegl and Dr. Visser have collaborated with Professor Arie Trouwborst, Tilburg Law School, on a new peer-reviewed article about Morgan’s legal rights which has just been published in the Review of European, Comparative and International Environmental Law (RECIEL) on 15 January 2019 https://doi.org/10.1111/reel.12270.


If all of this wasn’t troubling enough, the fact that Morgan, a wild-born orca was cross-bred with a male killer whale on loan to Loro Parque from SeaWorld, has not even been acknowledged, let alone addressed by SeaWorld. 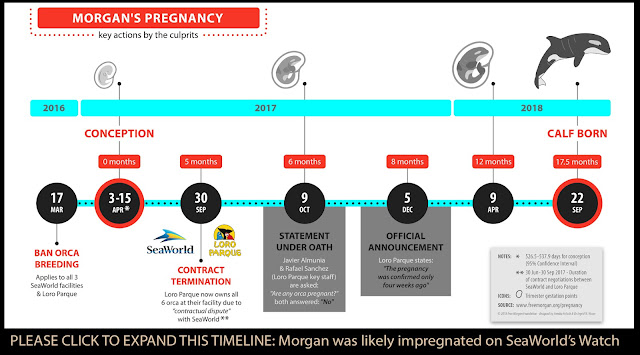 Remember, SeaWorld promised the public to put an end to the breeding of all its captive orcas. That promise, part of an agreement with The Humane Society of The United States (HSUS) took effect on 17 March 2016 and covered all whales including those loaned to LP. It also included wild-born Morgan, who was sent to Loro Parque by the Dutch Government under a permit which limited her use to research, not commercial shows or breeding, both of which Loro Parque has used her for. Morgan and the calf were already expecting to face problems, as Loro Parque claims that Morgan is deaf – which theoretically would limit her ability to communicate effectively with the baby.

"On the video the calf continues to be active. The venipuncture marks suggest an animal that is having frequent blood draws and probably IV antibiotics. This is based on the skin discoloration which I attribute on a more-probable-than-not basis to medical infusions. As someone that works with brain injury patients including malformations, I wonder if this is a congenital deformity of  the head, a normal variant, or something not before seen in orcas. If Ula suffers from a congenital brain insult or malformation this would likely be associated with movement disorders (think spastic cerebral palsy), diminished cognition and increased muscle tone. The cratered ulcerated pec looks a lot like a fungal issue, which would explain a lot; the meds, the skin discoloration & the protective tent. I hope Ula survives. In the wild she'd have the full support of a trained mother, midwives, babysitters and brothers to protect her. In this situation I imagine her chances of survival are small." 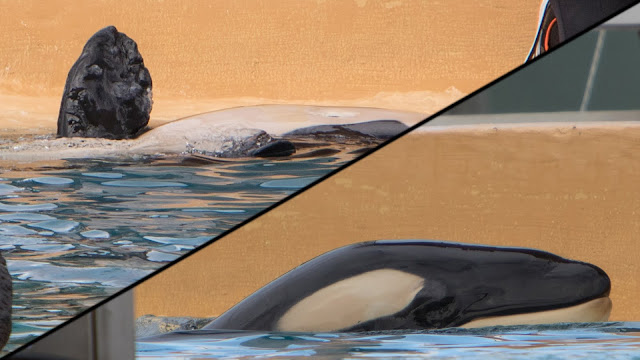 Tragically, as the current situation unavoidably illustrates, Loro Parque’s insistence on ignoring the SeaWorld/HSUS breeding ban, has now resulted in the birth of this poor calf; essentially a genetically modified orca or ‘GMO’ with tragic and heartbreaking consequences.

NOTE: This story is still developing & we will provide additional reactions as we hear back from experts who have been asked to comment. We can be reached @Voice_OT_Orcas 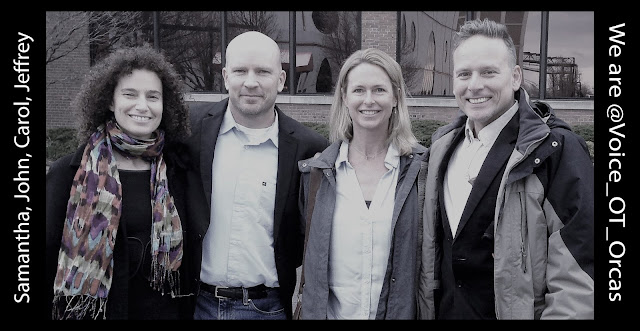