Have you ever read the actual Marine Mammal Protection Act (MMPA) of the United States? At Voice of the Orcas, we hadn't, until now. We focused on the part that deals with placing cetaceans into captivity, which begins on page 20, "Regulations on (the) taking of Marine Mammals."

Understanding what the MMPA says is useful because the #SeaCircus industry is an entertainment one, and is not fulfilling the spirit of the MMPA which suggests conservation, education and wild animal research. There was no research going on at SeaWorld on behalf of wild populations, or on the fisheries they depend on, when we were there. The big push was to try and figure out artificial insemination methods so they could boost the captive population. After all, the show must go on.

The photos help make our point. [It's interesting to note that SeaWorld is partially responsible for the MMPA because of how the company decimated the Southern Resident orca population here: Rounding up Shamu with Don Goldsberry]

Below, you'll find the legislation, as passed by the United States Congress in 1972, and as amended in 2007. But keep scrolling past that for our illustrated guide. Remember, we're reprinting the MMPA's first page below, unaltered. The only thing we added were the images.

The Marine Mammal Protection Act of 1972


To make this point clear, we've juxtaposed the opening page of the MMPA with photographs of the ridiculous stunts that the #SeaCircus industry is using to entertain the public. As you look at the images, try to imagine what type of learning it provides. Remember, the agreement to keep cetaceans captive is based upon the promise of education.

And, to make matters worse, when places like SeaWorld claim they "educate" the public, such as during shows for school children, they provide false information. Here at VOTO, we know this as fact, because, sadly, we did it ourselves, back in the 1990's.

Things like orca longevity are skewed downward so SeaWorld can better explain why their orcas die young, on average. They tout teeth irrigation(s) as "superior dental care." But they don't mention that the animals are breaking their teeth because of captivity. And they describe the frozen-thawed smelt, herring, and salmon as "restaurant quality," when in reality, its not. There is no such label on that fish. And they fail to mention that the freezing-thawing process removes precious fresh-water (fluids) from the dead fish which leads to dehydration in captive cetaceans. This is why Tilikum's diet is supplemented with 10 gallons of gelatin daily (roughly 80 U.S. pounds or 36.28 Kilograms).

Like us, cetaceans can't drink saltwater, so they rely on their food to get fresh water.

These images are in the public domain, and some of them are shocking. Feel free to download these and post on Twitter. We have a brief conclusion at the end...


(1) certain species and population stocks of marine mammals are, or may be, in danger of extinction or depletion as a result of man' s activities;

(2) such species and population stocks should not be permitted to diminish beyond the point at which they cease to be a significant functioning element in the ecosystem of which they are a part, and, consistent with this major objective, they should not be permitted to diminish below their optimum sustainable population. Further measures should be immediately taken to replenish any species or population stock which has already diminished below that population. In particular, efforts should be made to protect essential habitats, including the rookeries, mating grounds, and areas of similar significance for each species of marine mammal from the adverse effect of man' s actions;


(3) there is inadequate knowledge of the ecology and population dynamics of such marine mammals and of the factors which bear upon their ability to reproduce themselves successfully;

(4) negotiations should be undertaken immediately to encourage the development of international arrangements for research on, and conservation of, all marine mammals; 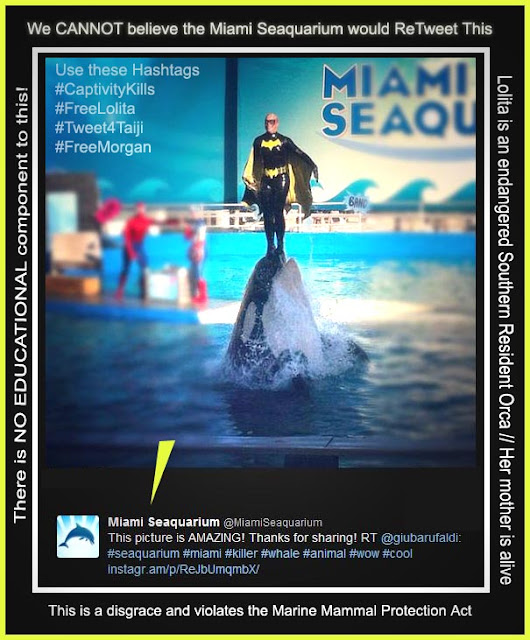 (A) move in interstate commerce, or


(6) marine mammals have proven themselves to be resources of great international significance, esthetic and recreational as well as economic, and it is the sense of the Congress that they should be protected and encouraged to develop to the greatest extent feasible commensurate with sound policies of resource management and that the primary objective of their management should be to maintain the health and stability of the marine ecosystem. Whenever consistent with this primary objective, it should be the goal to obtain an optimum sustainable population keeping in mind the carrying capacity of the habitat.

From Page 22 of the MMPA

COMMENT: And there's the loophole, highlighted above. What that last part, in yellow, basically does is allow for the "public display community" to develop it's own standards. And therein lies the problem.

The answer to this is:

Thanks to all of you who are reading this now and spreading the good word. We're on the right side of history.

The Politics of Captivity and Why Your Vote Matters

ELECTION UPDATE // WHY YOUR VOTE MATTERED & Thank You!

If you're disillusioned with the political environment in the United States...   join the club.

That said, there is a clear choice this election, and we at Voice of the Orcas believe the Obama-Biden Administration is more suited to deal with issues like climate change and ocean acidification; things that directly impact humans, whales, and all life on Earth. This is reflected, already, in the President's investment in clean-energy renewable resources such as wind and solar. See how many wind turbines have been added to this Central Washington landscape since our President was elected in 2008:


It's worth pointing out that the GOP and it's voters are pro-deregulation. For them, it's all about providing a business climate that does one thing:

We have no problem with businesses making profits, but only if it's done responsibly. Often times, the de-regulators get rid of policies and rules that protect animals and nature. Incredulously, the GOP hasn't officially recognized that climate change is happening.

It's this deregulation & tweaking of the Marine Mammal Protection Act that has gutted oversight of places like SeaWorld, the Miami SeaQuarium, & various marine zoos, and catalyzed the explosive development of these dolphin swim-with programs in places like Las Vegas and the Florida Keys. This translates into more dead dolphins & pilot whales at The Cove.


This is wrong. NOAA & APHIS should be more empowered to protect marine mammals, not less.

(Only time will tell if the Georgia Aquarium & SeaWorld will successfully import 18 Russian caught belugas).

We believe that an Obama Administration is more likely to enforce regulations that are already on the books, and will interpret legislation like the Marine Mammal Protection Act more favorably than a pro-Romney, (more) pro-corporation, administration.

We also believe that an Obama Administration is more likely to uphold the recent findings of the OSHA v SeaWorld hearings, in Sanford, Florida. SeaWorld has appealed this ruling, and a Romney appointed Secretary of Labor is more likely to "roll back" OSHA's findings, and his orders. Back in June, Federal Judge Ken S. Welsch stated:


"SeaWorld's own incident reports demonstrate that its safety program, either due to misplaced faith in operant conditioning or due to human error in implementing operant conditioning, exposes its trainers to the risks of death or serious physical injury."

Read Judge Welsch's entire verdict here. We recommend you skip the legal stuff in the beginning and go to the final pages:


It's also interesting to note that theses places promote, endorse, and give the majority of their campaign dollars to GOP candidates, and less for conservation:


SeaWorld Gave GOP More Money than It Spent on Conservation 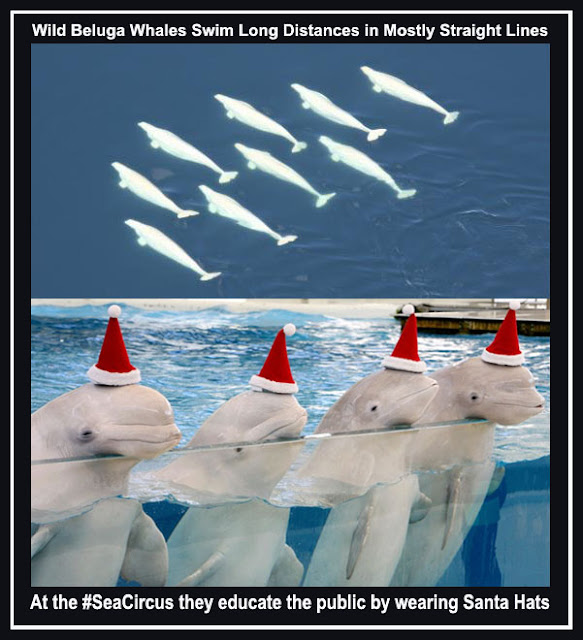 These dollars are provided to mostly Republican candidates because they often lead to benefits for the companies, including loosening the rules associated with cetacean captivity. Despite record profits in 2011, SeaWorld paid no Federal Income Tax this year. Read that story here:

Loosening regulations on the #SeaCircus has created a demand for more cetaceans. The end result is that Russian and Japanese collectors are experiencing large financial incentives to trap and even kill cetaceans, as is happening in The Cove, right now.  To quote a member of the Russian Academy of Sciences, Dmitri Glasov:


"Over probably the last three years, since China is developing quickly and they are building oceanariums, they are requesting lots of these animals. In Russia, as strange as it sounds, there is quite high domestic demand for this animal, too. That's why the number of commercial organizations that want to catch them and apply for permission to do so has gone up. 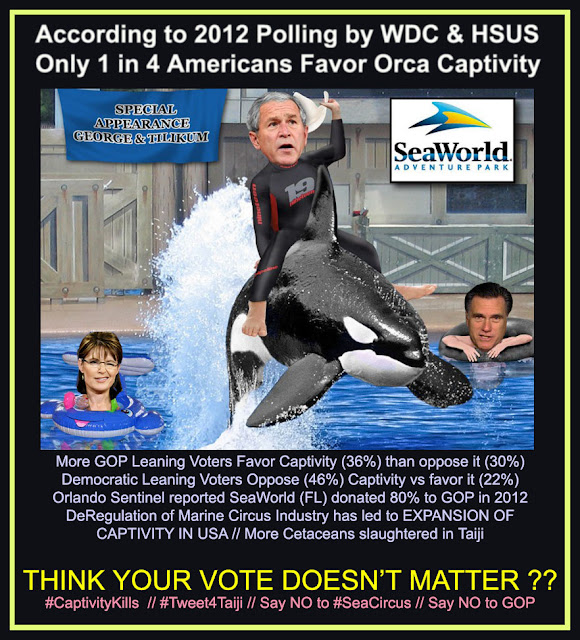