A Statement on Food Deprivation at SeaWorld

Q: Does SeaWorld use food deprivation?
Absolutely. But decide for yourself


Identical questions were posed to John Jett PhD & Jeffrey Ventre MD, former killer whale trainers. Jett is a visiting research professor at Stetson University in Deland, Florida, USA, and Ventre a board certified physiatrist in Washington state. Their responses are below, beginning with Dr Jett. There is an additional section that summarizes how killer whale food preparation happens each morning.


1. JJ: Does SeaWorld use food deprivation?

Food deprivation was a tool often used when I was a trainer. The concept is straightforward: Reduce the number of calories a whale gets over a period of time and that animal becomes increasingly food motivated. Animals are generally more likely to cooperate with trainers when they are hungry. Food deprivation is a normal component of the training environment, at least while I was a trainer.

2  JJ: Have you ever witnessed food deprivation, or witnessed a drop in an animals food amount prior to a special occasion?

I have both seen and have been a part of depriving whales of food too many times to count. For example, we would often know a week or more prior to August Busch IV visiting the park in Orlando. August Busch IV was the CEO of Anheuser-Busch, the company who owned SeaWorld while I was employed there, and we were always informed by management to cut food bases during the week leading up to his visit. This helped to ensure that Mr. Busch would observe a decent show. Hungry whales generally seemed to perform much better and more consistently, which of course was the objective.

I also witnessed food deprivation on targeted animals for specific purposes. For example, Tilikum was often deprived of food prior to teeth drilling or when he was initially asked to go into the (at the time) new back pool (“G” pool). Captive whales are often reluctant to enter new pools, especially when being asked to do so. Food deprivation was also used to help address difficult separations. For example, there was a time when Gudrun (deceased) and Katina were difficult to separate and both bases were cut on a number of occasions so that separations could be reinforced.


3. JJ: What else can you add on the topic of food deprivation?

Food deprivation is not immediately effective as it usually takes at least a couple of days of reduced caloric intake before a whale becomes motivated by their growing hunger.

1. JV: Does SeaWorld use food deprivation?

Yes. One can debate the ethics of withholding food from animals, but it is a tool that is necessary for companies with scheduled orca shows. All performance animals (as opposed to exhibit animals) have carefully managed food base amounts to keep them interested in food & willing to perform.

Some animals are clearly more food motivated than others, but ultimately they all must eat. Hunger provides leverage, especially when you consider that even sea lions weigh several hundred pounds & could seriously injure a trainer.


If you think about it, how else could you coerce an orca to separate from its family, remain motionless for teeth drilling, or pose for photos on a slide-out for 20 minutes without a hunger drive?

Does SeaWorld expect the public to believe that whales voluntarily swim into stretchers for transportation to another facility?  Really?


The reality is that most whales become agitated & fearful when the crane rumbles up to Shamu Stadium because they realize that one of their facility-mates, or possibly them, is about to disappear. This is especially true when separating a mother from it's calf. In those situations food deprivation is not only used, but is relied upon, along with plenty of man power.

VIDEO: Keto is beached & a wooden 4x4 inch post is placed into his mouth to keep it pried open for a medical procedure. In this case a long tube with a fiber-optic camera is inserted all the way to his stomach. This procedure is called an "endoscopy" and was done to look for paint chips in his gut. Does he open his mouth for this because he wants this? No, because he is hungry PRIOR to this endoscopy.

VIDEO: Blackfish star Carol Ray describes the Kalina separation story to a full house at #Superpod2. Kalina did not voluntarily separate from her mother.

Food deprivation is a training reality, and marine circuses should be honest about its use. The famous line that "our animals are doing these behaviors because they want to" is a very insincere way to describe why the animals are
performing many of their trained behaviors, especially ones that are uncomfortable. Granted a roll-over & belly rub is likely more enjoyable for a captive killer whale versus a pulpotomy procedure, but even roll-overs are trained using food.

Roll-overs have a dual purpose. They are used to portray a trainer-whale bond during a show, which is good PR (and by design), but they also allow trainers to visualize & access killer whale genitalia, a key to SeaWorld's artificial insemination program.

Withholding food becomes deprivation when it is done in a way to exert extra control over an animal; when it is intended to increase an animal's hunger drive. When I worked there, the order was to "hold the animals at half base," (or 3/4 base, etc.) meaning if a whale consumed 200 pounds of fish on a given day, hold him or her to 100 lbs. When deprivation is sustained, an animal will eventually cooperate for a desired show or husbandry behavior.

On at least one occasion I recall asking a supervisor, "What do I do with this extra bucket of fish?" The order was, "Grind it."

2. JV:  Have you ever witnessed food deprivation, or witnessed a drop in an animals food amount prior to a special occasion?

Yes, both.   The pressure was on when celebrities, politicians, athletes, or businessmen attended live performances. These were scheduled shows and known weeks in advance. Food was sometimes withheld to ensure animal cooperation.


If management needed a vet's approval to cut back food, they simply asked for it & it was done. The veterinarian's salaries are dependent on the show performances, too.


In the lead-up to a VIP visit the routine included scrubbing pool sides with a light bleach solution, removing dead fish from the bottom grates & making sure the VIP saw a good show in a clean stadium. Steps to ensure that important people saw a good show are routine & this translated into food deprivation for some whales. Taima was a notoriously disruptive killer whale who sometimes prevented shows from happening & who was eventually banished from doing waterwork. I was her primary waterwork trainer in 1994 & 1995. Her food base was cut on at least several occasions that I can recall, primarily to get her to separate into particular pools when asked. She had periods that included refusing to separate out of A pool, and her presence out there meant some shows were cancelled. The show must go on.


In regard to how food is distributed at Shamu Stadium, here's a summary:

The ordered food amount is written up onto the food board in the fish room. The board is a clear plastic rectangle hanging on the wall. Grease pencils are used to "make up the board," an actual phrase. The first column is for the whales, the rows are for food bucket amounts, in pounds. 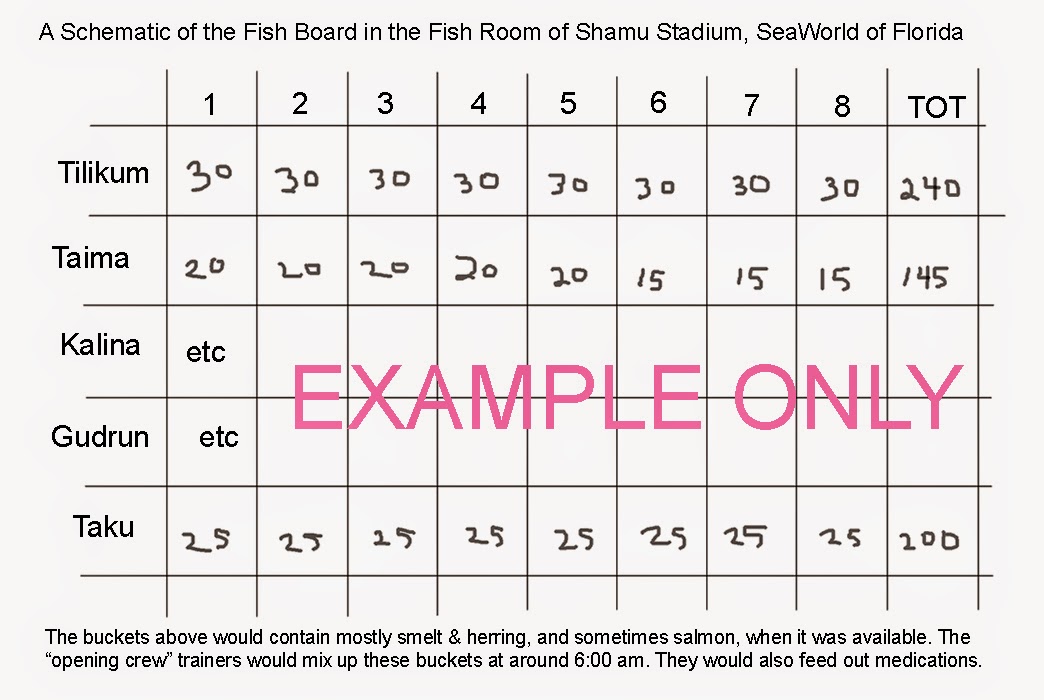 The buckets themselves are labeled as in the image below. Each bucket contains a mix of fish, mostly smelt & herring, and is weighed & stored in a walk-in refrigerator. Each animal has his or her own buckets, and for shows extra mixed buckets are prepared and hidden around the stadium. The food is placed at positions where behaviors would terminate, so a trainer can quickly spin around, grab some fish and move on with the show. You see a lot of hugs, rubs, and "secondary reinforcers" during shows, but it's all usually backed up (reinforced) by food, just not on every occasion. This approach keeps the whales guessing as to when a food reward will come.


When an order to cut an animals base comes down from management, a senior level trainer will make up a new food board reflecting those changes. And when the morning crew comes in they will simply follow the new numbers. Questioning management was and is not encouraged. And keep in mind that the term "cut the animals base" is almost assuredly no longer permitted, by rule or unwritten rule.


We understand that SeaWorld prefers not to call what it does, "food deprivation," so they play word games with this. They prefer phrases like "adjusted optimal food amount" or "best working weight" or phrases to that effect.


It reminds of Florida Governor Rick Scott banning the term "global warming." Just because SeaWorld prefers to use other terms for its practice of withholding food from show animals doesn't mean that SeaWorld doesn't practice food deprivation.

3. JV: What else can you add on the topic of food deprivation?

Food deprivation is built into the operant conditioning of free thinking & sometimes unpredictable killer whales.  Food is the primary leverage trainers have & one that is used to maintain control. Only at marine circuses are orcas & dolphins coerced into unnatural tricks for human amusement as well as their very sustenance.


Hey @SeaWorld if you want to prove that the whale's food bases are never dropped for training, why don't you release your records?
— Cetacean Inspiration (@CetaInspiration) April 10, 2015


Call it what you will, but food deprivation is alive and well at SeaWorld.


We former trainers at Voice of the Orcas have spoken out on the topic of food deprivation at numerous Q&A sessions & also during interviews with reporters & bloggers. Here is just one example from March of 2012. Be sure to read Samantha & Carol's thoughts on the topic here:  former seaworld trainers speak out about captivity

J. Jett & J. Ventre have two scientific writings on the topic of captive killer whales currently in print. One is a chapter in a university textbook dealing with animals in tourism. The other is a peer-reviewed article in the J. of Marine Mammal Science. Stay tuned.