VIRAL ALERT:  The original source video, "Near Death at SeaWorld," has eclipsed 5 MILLION views at YouTube, and counting.  VISIT our comprehensive WEBSITE HERE: Voice of the Orcas

U.S. & international major media coverage reveals a previously unknown and shocking captive orca attack video involving the wild captured whale Kasatka. With this "new" information, it's obvious that SeaWorld knew its orcas could kill its trainers, despite testimony to the contrary at recent hearings in Sanford, Florida. And especially considering the death of SeaLand of the Pacific trainer Keltie Byrne, in 1991, by Tilikum. An examination of the records from SeaLand and SeaWorld, Orlando, reveals an eerily similar situation. That is, Tilikum pulled both of them into the water. Keltie was pulled in by her leg, and Dawn by her left arm.

In the video you're about to see, watch as Kasatka "rag dolls" Ken Peters around the poll in front of guests. He's lucky to be alive.


The hearings in Sanford, FL, pitted the Secretary of Labor (OSHA) vs SeaWorld in a dramatic showdown that was heavily reported and partially filmed for a feature-length documentary that will likely hit theaters in 2013. OSHA had slapped SeaWorld with a "willful" citation, which was later reduced to "serious," but safety abatement recommendations were upheld by Federal Judge Ken S. Welsch. The latter part is important as it could mean an end to SeaWorld's famous "waterwork" maneuvers, where trainers dive off the rostrums of orca, as well as surf on their backs. SeaWorld, a multibillion dollar corporation owned by The Blackstone Group, has stated that roughly 70% of it's revenues are generated by its performing orca shows.  So there's a lot of money at stake, and SeaWorld will likely continue its appeal, irregardless of the consequences this could mean down the road for trainers and orca alike.


So, three years after this "Ken Peter's event," in 2006, two young people were killed by two different SeaWorld killer whales. Keto brutally rammed Alexis Martinez during a water training session on Christmas Eve 2009, crushing his thorax. Exactly two months later, Tilikum would pull in and dismember Dawn Brancheau in view of the public. She was on a ledge that SeaWorld considers "dry work." It's no wonder that OSHA investigators placed a "willful" label on the citation. Based upon the videos below, and hundreds of other incidents (some not documented), SeaWorld was keenly aware of the danger it placed upon it's training staff.

Question: Until now (and through great private effort using the Freedom of Information Act) why has this video not been shared publicly?

A: Using the courts, and despite four human fatalities and numerous near-death events, SeaWorld continues its fight to put trainers back into the water, at all cost, and public opinion DOES impact the courts. This powerful video illustrates that trainers are at the whales mercy, and the whales think for themselves. SeaWorld contends that the whales are "under control" and predictable.

On 29 November 2006 the captive female orca Kasatka grabbed, dunked and thrashed trainer Ken Peters in an unforgettable display of aggression that Federal Judge Ken S. Welsch described as "chilling." The Good Morning America crew said that Kasatka was "rag dolling" Peters. Check out the collection of media below, and your comments are appreciated. We're still collecting more links as this story continues to gain worldwide media attention.

Q: What safety measures were implemented by SeaWorld after this event, and would policy changes have saved Dawn Brancheau?


A: Aside from banning Kasatka from waterwork performances, no known steps were taken to ensure trainer safety after this attack. 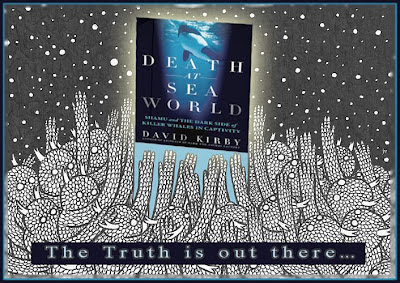