NOTE: Descriptive medical and forensic language is used in this article to describe the "struck by" hazard posed by captive killer whales on their human handlers

According to Forbes Magazine the US National Healthcare Expenditure (or NHE) is approximately 3 trillion dollars annually. A portion of that expenditure goes to pay approximately 90,000 certified medical coders around the country.

For those that work directly within the US medical healthcare system you know that the industry, including hospitals, administrators, doctors, nurses, & staff is carefully & nervously monitoring the transition from the current ICD-9 to the ICD-10 system.

ICD is an acronym for the "International Classification of Diseases." These diagnostic codes describe what condition you are getting billed for by your physician or hospital. For example, there is a code for low back pain, 724.2 and migraine headache, 346.9. The United States is currently on the ninth edition, and after several delays will be transitioning to the ICD-10 in October.

The Connection to SeaWorld

Read about Keto's "struck by" attack at Loro Parque, here.

As described HERE, the new ICD-10 codes are being implemented to provide more "detailed healthcare data and a greater flow of that data to improve medical communication, which could contribute to advanced... protocols and clinical pathways."

Now, as a result of the two tragic deaths in Orlando & Loro Parque, the US medical coding system has adopted a specific diagnosis in its ICD-10 library to address future instances of captive killer whale aggression. And no, this is not a joke:

2015 Billable Code Not A Principal Dx

Lastly, in an effort to educate physicians, nurses and staff, at least one hospital in Washington state has hung the following poster in its hallways to raise awareness regarding ICD-10 changes. In all likelihood the artists and employees who crafted this piece are not aware of its relationship to actual events perpetrated by incarcerated orca against their human handlers.

This is just another sign that it's time to #EmptyTheTanks 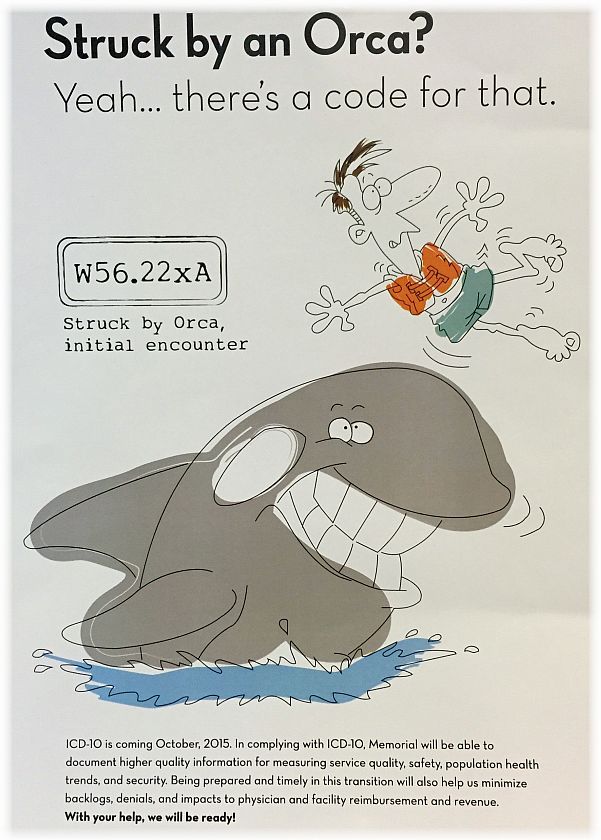