In this interview with Bloomberg
Businessweek, SeaWorld CEO Jim Atchison not only reinforced the notion that SeaWorld management is inept, see Dodo's take-down, here, the article inadvertently demonstrated that Kelly Flaherty Clark, curator of animal training, lied under oath in a federal courtroom in 2011.

As a reminder, this trial was national headline news, heavily attended, and widely followed. It began on Monday, September 19, 2011, lasting about two weeks, total. It was held at the Seminole County Courthouse in Sanford, FL, USA, with Federal Judge Ken S. Welsch presiding.  John Jett PhD and I were subpoenaed by Judge Welsch. You can view my subpoena, here.

[The fascinating court transcript, filled with SeaWorld "whoopers," can be found & downloaded here. The exchange reported below is on page 133] 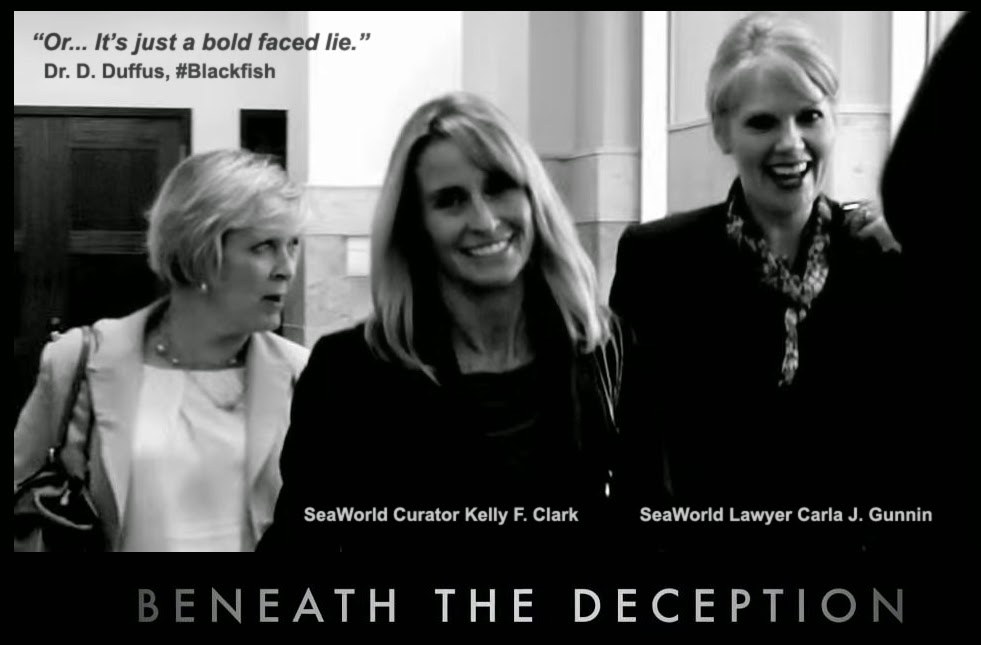 SW ATTORNEY:  Ms. Clark, I just have one more question for you. You mentioned something about Loro Parque, and I just want to clarify for the Judge. Is that a park owned by SeaWorld in any way?

SW ATTORNEY:  Are they affiliated to your knowledge with SeaWorld?

SW ATTORNEY: That's all I have.

For the record, curator Clark and Dawn Brancheau were close friends. In this article & video (60 Minutes Australia) they were described as "best friends."  Kelly was also Dawn Brancheau's boss, and sent her to Loro Parque. Relevant because Gunnin adds the phrase, "to your knowledge," which is a potential back-door out.

The bottom line is that Kelly Clark had demonstrable knowledge of the association between SeaWorld and Loro Parque, as well as of her "best friend," whom she sent there to help train the SeaWorld killer whales; and also to help train the Spanish trainers. Thus, the phrase, "to your knowledge" doesn't provide her with an out.

This photograph demonstrates the connection of SeaWorld & Loro Parque. 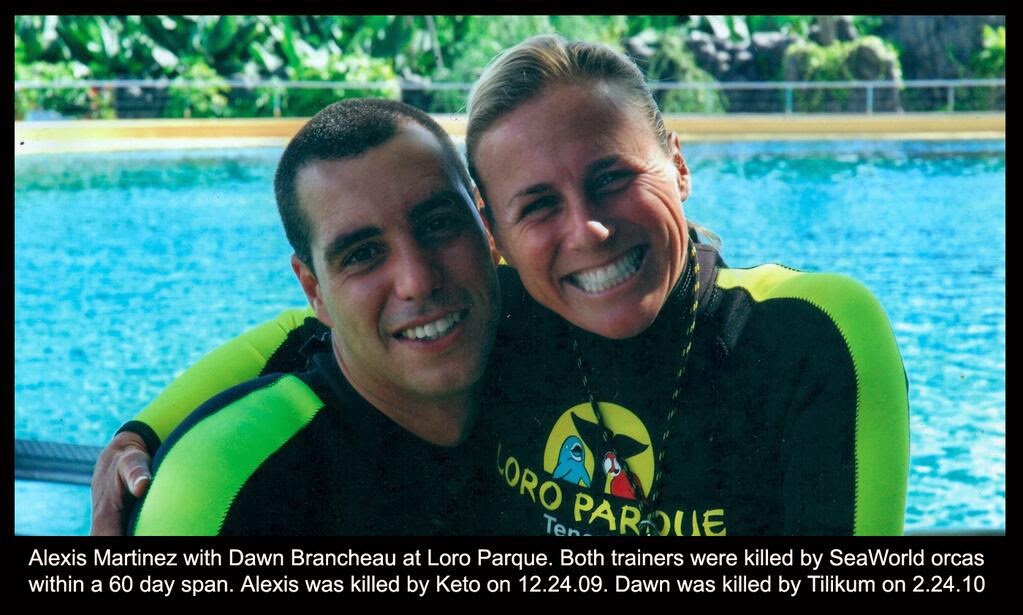 Next, because it was the SeaWorld attorney, questioning her own witness, it demonstrates a tactic. One that was planned and designed to separate SeaWorld, legally, from it's relationship with Loro Parque, and culpability in the death of Alexis Martinez. [Note: This is where the article comes into play].

...as Atchison and his team have dealt with fallout from Blackfish, the documentary that shed unwelcome light on the lives of SeaWorld’s most valuable assets, the 29 four- to six-ton killer whales, or orcas, kept and trained at parks it owns or helps manage.   [Emphasis added]


"SeaWorld hasn’t participated in capturing wild orcas since the practice was banned in 1972. Of the 29 whales it manages, five were captured—including Tilikum     [Emphasis added]

Those statements confirm three things. First, that SeaWorld helps manage Loro Parque, proving that Kelly Flaherty Clark made a "bold-faced lie" under oath, and as demonstrated in the movie Blackfish. Secondly, that SeaWorld considers the 29th orca in its collection, Morgan, a company "asset." And thirdly, that Atchison lied regarding when SeaWorld stopped capturing orcas. In the chart below, note that Morgan was wild caught in June of 2010. And also note, here on CNN, this week, that former SeaWorld collector, Jeff Foster, describes capturing orcas for SeaWorld well into the 1980's.  [Warning, video below contains graphic footage]


See chart below, which was provided by WDC and can be downloaded here.

Perhaps these "bold faced lies" will be of interest to the Rosen Law Firm, which has filed a class action suit against Atchison, Blackstone, & other SeaWorld management. In it the suit questions the company's credibility and asserts that SeaWorld misrepresented its value, ripped off investors, and covered up its cruel practices with killer whales.

Based on personal experiences, this is nothing new for SeaWorld.

Jeffrey Ventre is a medical doctor licensed in the state of Washington and is a board certified specialist in the area of Physical Medicine and Rehabilitation. Jeff was a marine mammal trainer at SeaWorld from 1987 to 1995. He worked with John Jett PhD, Samantha Berg, and Carol Ray, at SeaWorld in Orlando (as well as Kelly Clark & Dawn Brancheau). The four ex trainers continue to spread the word regarding cetacean captivity as a group known as "Voice of the Orcas."