Ballot Stuffing in Orlando and Censorship at FORBES

Trying to untangle itself from its 50 year history of misinformation, SeaWorld ramps up its use of questionable tactics to control the flow of information; including intimidating journalists via corporate power-plays & stuffing ballot boxes related to public opinion. As reported by CNN:

(CNN) -- Maybe it's not surprising that in SeaWorld's hometown of Orlando, an online poll showed overwhelming support for the theme park in light of a recent documentary that has raised questions about its treatment of killer whales.

What has turned heads, though, is the fact that more than half of the votes appeared to have come from a computer, or computers, at SeaWorld itself.

On December 31, the Orlando Business Journal posted an unscientific poll asking, "Has CNN's 'Blackfish' documentary changed your perception of SeaWorld?"

By midday Thursday, the paper reported, an overwhelming 99% of respondents said "no," their opinion of the beloved park had not changed.

What the Journal discovered upon a closer look, though, was that 54% of those 328 votes had been cast from a single Internet Protocol (IP) address.

An IP address is an identifier that can represent either a single computer or a connected network of them.

At Voice of the Orcas we're familiar with SeaWorld's heavy handed tactics. When we worked in the animal training department, "waterwork" was routinely used as a tool to train employee compliance, like dangling a carrot in front of a horse. According to David Kirby's investigative journalism for his book Death at SeaWorld, it was even used by senior trainers to obtain sexual favors for those one day hoping to "ride Shamu." Although we never witnessed this personally, it is in line with the culture, and a lawsuit was filed.


We once strove to work with the #Blackfish at Shamu Stadium and noticed that those who didn't pull the company line were "shipped to Sea Lion & Otter," or withheld from waterwork, or terminated. Hence, we are thankful that Blackfish & Death at SeaWorld have pulled back the curtain on SeaWorld's business model, which includes incarcerating cetaceans, polar bears, and pinnepeds, for profit. Through it's massive public relations team, this corporation has been selling the "Happy Shamu" mythology for five decades. Please watch the CNN report below for more on this first story:

The second demonstration of corporate malfeasance (in the past 24 hrs) has to do with censorship at F-O-R-B-E-S magazine. After he "rattled some corporate cages" by writing a pro-Blackfish article viewed 77 thousand time, Forbes journalist James McWilliams was censored, and resigned his position; in his words: 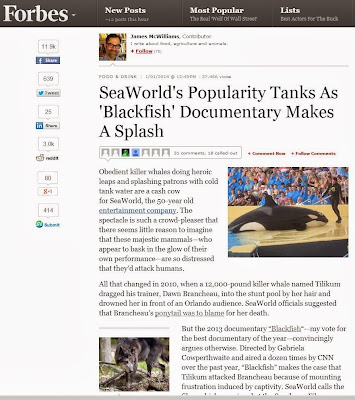 Well folks, I suppose it was bound to happen. I wrote a dozen pieces for Forbes.com and enjoyed it very much. But the 13th–an article critical of SeaWorld (a 2.5 billion dollar company partially owned by the Blackstone Group) and praiseworthy of ‘Blackfish” (made on a small budget)–rattled some corporate cages.

After I posted, editorial management demanded changes that I could not, in good conscience, make. So the article got pulled (after 77,000 hits in one day) and I left my position. Honestly, the experience, brief as it was, was a good one. Until today, when it wasn’t. My immediate editor was terrific.

But, in the end, McWilliams and Forbes.com: mismatch.


The author, James McWilliams can be reached at @the_pitchfork. Here are a just few reactions at his blog, where he has republished the original article.

Lauren says:
January 3, 2014 at 12:08 am
Mr. McWilliams: #Blackfish opened my eyes…wide…to the cruelty of capture, isolation and exploitation of these magnificent creatures. Your article is on point and I want you to know that you have this reader’s… and now determined animal rights activist…respect and admiration. Thank you.
Reply

Kimberly Ventre says:
January 3, 2014 at 12:45 am
Hats off to you for writing the truth. Corporations like Forbes, Blackstone, and SeaWorld are so used to “controlling the narrative” they don’t know what to do when facts and science don’t support their story.
It would be great to know what they wanted you to change. I suspect they are unhappy to read that preteen generation has taken notice of Blackfish.

Tracy says:
January 3, 2014 at 1:42 am
Thank you for this article, for taking a stand, and for refusing to compromise your standards. You acted in a truly admirable way, and I have nothing but the utmost respect for you. I’m so sorry that you now have to deal with looking for a new position, however my hope for you is that you will find one with a company that will appreciate the fact that their writers are willing to use their voice and are unwilling to compromise in order to satisfy the need by a corporation to shut up, and shut down a truth that the world so desperately needs to know. Whether you believe what you did was a big thing or not (I hope you do) please know that today you stood up for those who do not have a voice, and if they did I’m sure they would be thanking you. I’m sure you made your son proud.
Reply

The Orca Project says:
January 3, 2014 at 8:24 am
Good for you, and Thank You James for standing your ground and not caving to corporate political pressure.
Something tells us you’ll do just fine without Forbes and will gain an even larger following of new friends.
Thanks again!

mynamefluffy says:
January 3, 2014 at 1:14 pm
As someone who has been writing/blogging/tweeting for a while on the marine mammal abuse, slaughter and captivity regarding Sea World and Taiji (and they are connected), I am not at all surprised at this parting of the ways. Sea World has a powerful corporate footprint, and they are scared. The exposure that has come about as a result of Blackfish has removed the proverbial toothpaste from the tube and there is no going back. I have communicated with non-AR people who have said “I’m done with Sea World.” or “I’ll never take my kids there again.” The truth is out now, and they are going to discredit, stifle, or attempt to intimidate any voice bringing this reality to even more people. I actually find this an encouraging sign, aside of course from the end of James’ contributing arrangement with Forbes (which I am sorry to hear about). The fact that Forbes picked this topic as the one to quibble about says something important about the state of pressure and exposure on the important issue of marine mammal abuse and exploitation. ~Linda
Reply

Thank you James for your courageous stand against corporate power.