Our Comments on the New Orca Encounter at SeaWorld

Despite the corporation's reluctance to say it, SeaWorld's new "Orca Encounter" is just another show, without improvements for the killer whales who are forced to live at Shamu Stadium.

And based on space constraints, broken teeth, two deaths by mosquito, & witnessed aggression, the whales are not thriving despite the statements of SeaWorld's PR team. This includes Jungle Jack Hanna, a board of directors member for their "Conservation Fund." Jack has been shilling for SeaWorld since at least the mid 1990's when some of us at VOTO met him. His recent interview on Good Morning America is linked in the Tweet below:


The set changes enhance the customers' experience and create different optics; a PR thing. The new set has a larger 140 foot screen, the music has shifted from "pop" to "cinematic," and now the waterfall pumps run for several hours daily.


Sound can travel through any substance, but not through a vacuum like outer space. In water, due to it being non-compressible, sound has more power (watts) and intensity (watts per square meter or decibels) than it does in air. Thus, waterfall pumps, pneumatic gates, construction noises, roller coasters, & kids pounding on the glass are more intense from the perspective of the orca vs the kid eating popcorn in the stands. Bottom line: The captives are dealing with more noise intensity than ever. A third coaster is reportedly on the way:

Currently, trainers (now referred to as "behaviorists") are sending orca maneuvers from backstage and also doing most of the feeding there. They've taken the (unnatural) trainer out of the scene. The show producers prefer audience members not-observing whales getting fish-for-tricks. This is a shift compared to previous shows which included "fish teases" and dumping double-handfuls of smelt, herring & the occasional salmon into the posterior oral cavities of the orca.

They dont feed them anymore infront of the public during the show? Trying to trick ppl tp think its natural and not a trick still...
— Blackfish_Awareness (@ChelsyOrca) May 30, 2017

In the past shows have focused on the human-whale relationship. Not so much here, although that could change as the show evolves, which they all do. This strategy has the added benefit of not exposing the dental damage in captive Orcinous orca, as seen below in Shouka. It's a shame SeaWorld doesn't share scientific data regarding the quantity and quality of teeth damage seen in captive orcas in their care.

In the show, SeaWorld claims they are helping wild whales, a debatable point as they have not lifted a finger or contributed a dime to restore the Southern Resident orca population, the one it decimated for over a decade, until it was kicked out of Washington, as seen here:


Saving the So. Residents is an opportunity for SeaWorld to come out heroic. They could likely save the very population they drove to the brink of extinction if they made the decision to do so. This orca clan needs help getting more salmon and SeaWorld has a large PR team to spread the word.


There is just one endangered orca population in the world, the Southern Residents, which included Shamu, Kandu, Winston and about 40 others they removed or killed. Why not step in and get these starving killer whales the Chinook salmon they need? It's an awesome idea and a win-win scenario for SeaWorld, the wild whales, and the public... it would be a huge success.

The company could start a contemporary "save the whales" campaign, help bring down some deadbeat dams and restore the river systems where Shamu's descendants get their food from. In conjuction with select grocery stores, they could recommend that their guests purchase wild salmon only as fish farms are spreading disease, including salmon leukemia, to wild populations. Unfortunately and instead, SeaWorld is collaborating to build the largest fish farm in the world a few miles offshore from San Diego. It will have negative impacts on local wild fish as per this article:

The Many Problems With the Proposed Fish Farm in San Diego

Lastly, despite the PR blitz of happy thriving whales featuring "natural" behaviors, there are no "new behaviors." It's the same series of conditioned tricks;  breaches, slide outs, fast swims, waves, et al, wrapped in a different package. This might fool some people, but does nothing to improve the living conditions of the orcas in SeaWorld's care.  Instead of "Madonna" or "J-Lo" or other popular music, the whales get a high-decibel cinematic soundtrack in addition to  more hours of pump noise.

While we appreciate the wild orca footage and attempt to educate, the show comes off as an infomercial, promoting a captivity corporation who's core business is the exploitation of marine mammals for profit.

It's the business model that needs to change: Not the set or the script.

The whales are still swimming in circles, neurotically grinding & fracturing their teeth, enduring social strife and aggression, living in confined spaces with nowhere to run, and generally living a degraded quality of life.

Thus far SeaWorld has been unwilling to consider retirement of these captive #Blackfish to ocean sanctuaries. We'd welcome that shift with open arms.
Posted by JV at 10:35 PM 12 comments: 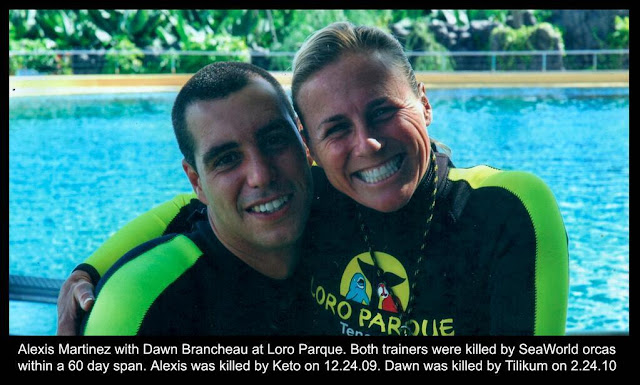 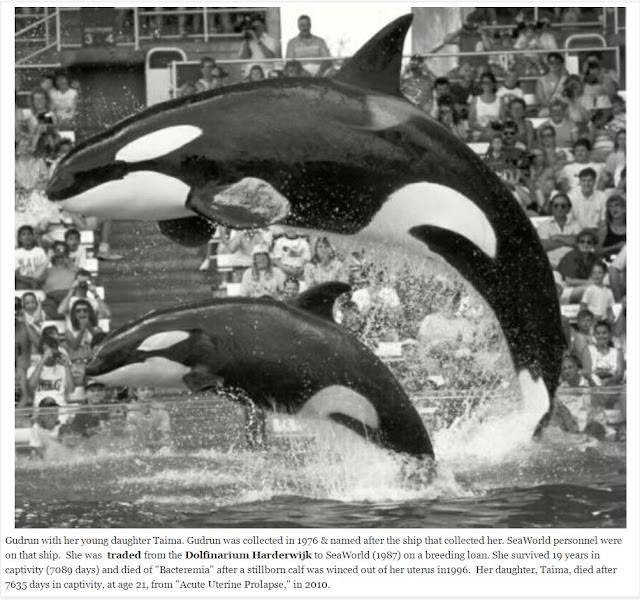