I guess if you're a multi-billion dollar corporation that has profited greatly from marine mammal captivity; and if weaving corporate misinformation into the public discourse to manipulate customers has been a standard practice for 50 years, what's one more whooper, or two?

It's been said that the SeaWorld Public Relations  department is the "Gift that Keeps on Giving." And here is the latest example, from SeaWorld's fan page. The claims, packaged in an "Action Alert" were sent out into the world of social media, just this week: 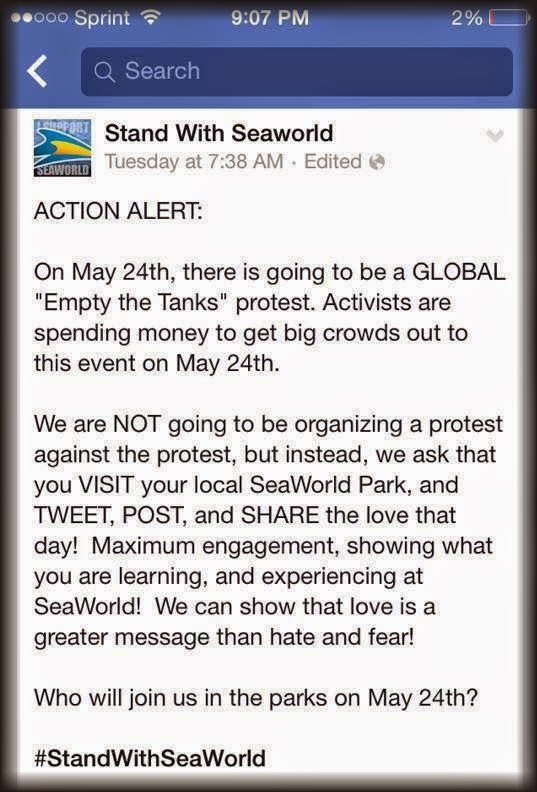 According to the Action Alert, "Activists are spending money to get big crowds out" to the global #EmptyTheTanks event scheduled for Saturday, May 24, 2014. To cut us some slack, SeaWorld is not officially calling for a counter "protest against the protest," but instead, just wants you to buy a ticket and spend a few hundred dollars at their parks, in a show of solidarity with its dwindling number of followers. The billion dollar corporation is also calling all hands on deck to "TWEET, POST, and SHARE the love that day!"

Lastly, and most incredulously, SeaWorld is claiming that the message of captivity (which they call "love") is a "greater message than hate and fear." Basically, the cited polluter of Mission Bay, decimater of the Southern Resident killer whale population, low wage paying, mega corporation is calling the animal welfarist community a bunch of haters.


To get to the bottom of this, Jeffrey Ventre (JV) from VOTO has teamed up with the event founder, Rachel Carbary, for a few quick questions. JV:  Rachel, as a Sea Shepherd Cove Guardian, you've witnessed the annual small cetacean slaughter at the infamous "Cove." This experience inspired you to create the #EmptyTheTanks event which will occur this Saturday, May 24, 2014, in cities all over the world. Can you connect the dots for us and relate how "The Cove" and the captivity industry are connected?

RC: My time spent in Taiji absolutely changed my life. I remember on my trip to Taiji in January 2013, the first time I saw with my own eyes a skiff carrying dolphin killers and dolphin trainers go into the killing cove.  They were all smiling and working together. The trainers go into the killing area to inspect the captured dolphins in order to determine if any of the animals there are worth buying.

When they do not find any that meet their specifications, they leave and that whole dolphin family is slaughtered. 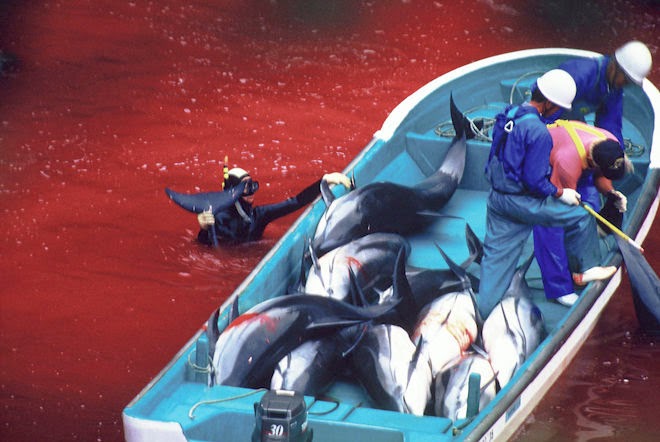 JV: This is your second annual event. Last year the event was in July, but this year it's in May. In the USA, this corresponds with Memorial Day weekend. What is the rationale to move the date up, and do you anticipate it being a Memorial Weekend tradition?

RC: We simply moved the date up to 24 May because it was a weekend that we knew there would be a great deal of people going to the parks. Holiday weekends are big business for these places so we wanted to hit them on a day when we knew we could reach a lot of people. The goal of Empty the Tanks is public awareness so of course we wanted to reach as many members of the public as possible. The date for the 3rd Annual Empty the Tanks Worldwide has not been decided yet.

JV: You've participated directly at The Cove, and I presume you've seen Blackfish. Can you speculate how these two movies have "moved the bar" forward in regard to the animal justice movement?

RC: I have seen both movies multiple times and think they are both such incredibly important films for everyone to watch. I think both The Cove and Blackfish did a great job of just opening people’s eye up to the truth.


Most people are so busy with everyday life and they do not stop to consider something as basic as the unethical decision to watch orcas doing circus tricks in a glorified swimming pool. They just see it as a family day out at the amusement park. Once they see these films their eyes are opened up to the truth. They see the dirty and bloodly truth behind the dolphin slaughters in Japan and they see what really goes on behind closed doors at the most well known marine park in the world. These movies have inspired so many people to speak out against the dolphin slaughters and the captivity industry. They have created a movement towards ridding our world of marine mammal captivity.

JV: SeaWorld is putting out PR saying that "Activists are spending money to get big crowds out at this event... we ask that you Tweet, Post, and Share the love that day. We can show that love is a greater message than hate and fear!

#StandWithSeaWorld." That is pretty outrageous messaging. Can you comment on the various components of the corporate PR?

RC: I honestly laughed when I read that statement from SeaWorld.

It seems as though they are getting desperate to discredit the Empty the Tanks campaign. They are lying and trying to make it appear that Empty the Tanks supporters are being paid and bribed into showing up on May 24th. Nothing more could be further from the truth. The only money that has been spent on Empty the Tanks is my personal money for the website hosting. People are coming because they support this campaign and the freedom of whales and dolphins. Its compassion, not money that fuels Empty the Tanks Worldwide. I do not blame or hate the people who still want to “#standwithseaworld”. I just think they have yet to remove their blinders and accept the truth about what kind of place SeaWorld really is. SeaWorld's bottom line is about profits, not conservation and animal welfare. This latest attempt to say that Empty the Tanks is spending money to acquire supporters just goes to show that money is the number one thing on their minds. They don’t understand that money is not what drives activists like myself and the amazing event hosts from around the world, we are driven by compassion and a sense of what is right and moral.

JV: Your event seems to be growing daily. I know that Carol Ray (of VOTO) will be in Chicago for an event. I've been invited to the Seattle and Vancouver events, and will likely attend one of those. How many cities are now involved?

RC: Well I hope we see you in Seattle, which is the event I will be attending.

Right now, we have 52 locations in 21 countries standing up against the captivity industry on May 24th. We are united worldwide and we will get our message out that the time has come to empty the tanks!