Superpod is a biennial gathering on San Juan Island, Washington, USA, hosted by Voice of the Orcas

#Superpod6 is the sixth incarnation of an event that began in July 2011, organically. It is organized through volunteerism & minimal fund raising. It's an event for learning, sharing, & inspiration. It's open & free to the public and brings together scientists, authors, journalists, former trainers, naturalists, orca advocates and people who want to see killer whales swimming, playing & chasing prey in the ocean. It's fun & the San Juan Islands are stunningly beautiful.

Recent years have seen an increase in the number of transient orcas in the Salish Sea. Whale watch patrons are just as likely to see transient families as they are to see the fish-eating Southern Residents. Humpbacks are increasing in number & frequently seen via boat. Bald eagles, dolphins & stellar sea lions are plentiful.

Whale watching is land-based or via several whale watch companies. Here's a Southern Resident bull orca swimming in front of #Superpod5 attendees at Lime Kiln State Park, with voice over by attendee Brian Goodwin, who traveled from Florida:

July 19th will mark the five-year-anniversary of #Blackfish opening at theaters in New York, Los Angeles and Hollywood. Appropriately, this year's theme is The Blackfish Effect. That said, topics will be far-ranging, including on current events, state of the Southern Resident orcas, shake-ups at SeaWorld, wild and captive orca research, the Russia-China-SeaWorld connection, Morgan, Lolita, Corky updates, salmon restoration, the lower Snake River dams, scholar advocacy, short films and more. Our venue is the San Juan Community theater, seen in the drone video here:


Join @Voice_OT_Orcas at#Superpod6 for the #Blackfish Effect. This #drone video shows the town, venue & has some key details pic.twitter.com/geOuMoO10F
— Voice of the Okras (@Voice_OT_Okras) March 6, 2018


At the theater, over two dozen experts & advocates will take the stage for Ted Talks Style presentations including short films on Granny & Moby Doll. The theater will also house booths and interactive information tables. Meet folks from the Center for Whale Research and conservation groups that will be on island for the event. The official #Superpod6 T-Shirt, designed by artist Kaarina Makowski, is below with her comments. Guess who the whales are on the official logo? 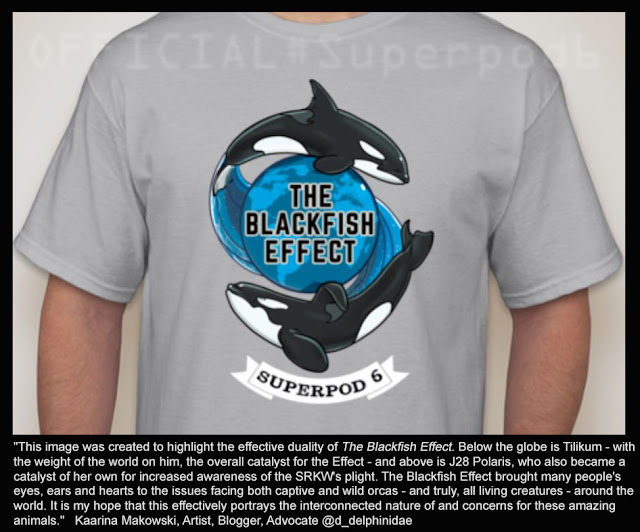 NOTE: This list is a working list in no particular order. Most on this list will be presenting or involved in scholar advocacy. We will update the list with more details, add-ons or cancellations

NOTE to presenters. Contact one of us at VOTO if you don't see your name here!